A reader reached out to me this week and asked, “Why are you so bullish about 2022?”

So in my latest video, I’ll tell you why I’m so optimistic about the year ahead…

And I’ll show you where the profit opportunities are hiding!

But you can call me [Zatlin strokes beard] “Scruffy McGee.”

I'm two weeks into exploring “not shaving” during my holiday. And I have to tell you — it's been fun…

But not nearly as fun as this fantastic “Santa rally.”

As I told you back in September, the market would be raging as we closed out the year.

Now, remember, I don't have a crystal ball. I'm simply going off what the data is telling me.

Why I'm so bullish…

And where we should be placing our bets.

To start, I’m sharing this with you today because I got an e-mail from one of my members, Michelle.

(Thanks for your question, Michelle!)

And Michelle wanted to know, “What's going on in 2022 that makes you so bullish?”

(And by the way, if you want to reach out and ask me questions, please do! Remember, I can’t give any personalized investment advice. But whenever possible, I’ll respond like I am now.)

So, Michelle, here’s why I’m so bullish — and it’s the same reason I expected a Santa rally:

I'm just following the numbers and the data!

And right now, the numbers and data are leading me to a major theme.

Reflation is Heading Down the Pipeline

That theme is reflation.

And it means growth will keep coming down the pipeline!

So now I'm going to share a few charts that show, big picture, what's going on…

And why we can expect 2022 to be another bullish year!

The Age of the Internet

This is a chart that's fundamental for understanding our macro economy.

It shows the ratio of business inventory as compared to sales.

Basically, it’s a way to see how much inventory a company keeps on hand relative to its sales.

And as you can see, as the internet kicks in, this ratio — the amount of stock that companies need to keep on hand — goes down consistently and rapidly.

The reason is twofold:

First, if you're a business, the internet gave you really good visibility as to what was going on with your customers. You knew what they actually wanted.

That meant you didn't have to overstock, and you could keep lean inventories.

And second, businesses had the ability to stay lean because the internet got suppliers more tightly connected. They were able to get closer to the “just-in-time” type of system that we use today.

The bottom line: after the internet, businesses didn't have to keep a lot of stuff on hand.

But look what happened when we get to the most recent COVID recession.

There are no sales for businesses. So they slash inventory. They bleed it off. There's no demand…

And that's why that ratio goes down. It gets down to just a core level of demand, and almost no inventory.

But as we’ve seen from this past year, demand came raging back.

At the same time, there's been some supply chain disruption.

So what are we looking at now?

The inventory to sales ratio is practically the lowest it's ever been.

This means that sales are so strong, they’re outpacing the ability of companies to meet demand.

As a result, businesses are buying as much as they can.

And remember: during COVID, companies were de-stocking, they weren't stocking at all.

So now we're in a place where businesses have money coming in, and demand is out-stripping their ability to supply products and services.

And if money's coming in at this level, we're looking at profit growth like you wouldn’t believe!

What Companies Are Doing

Speaking of profits, here's another chart you should consider: 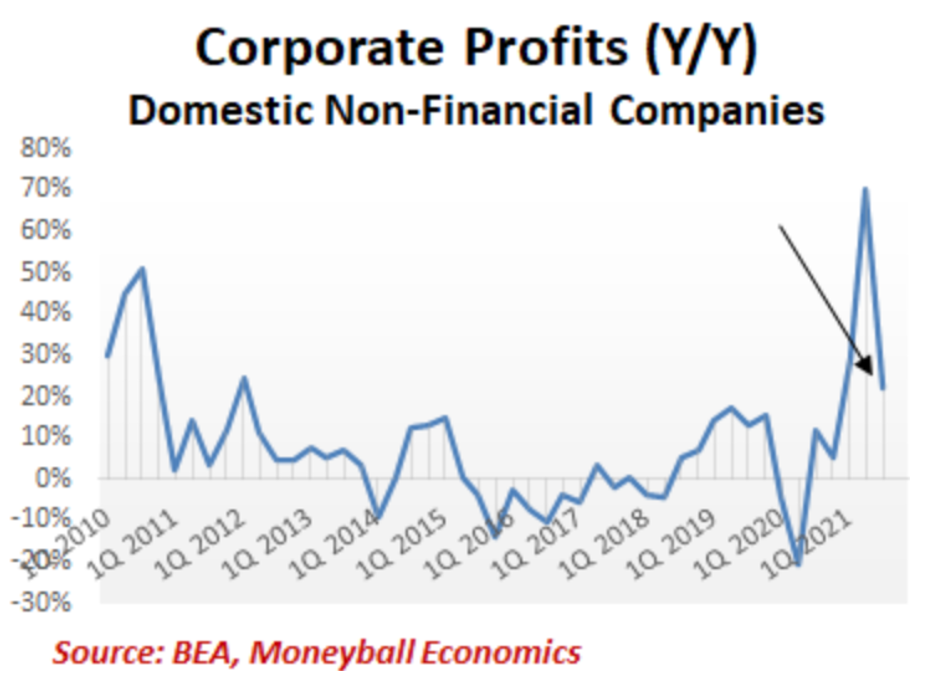 This is growth in corporate profits year-over-year. This represents domestic, non-financial companies — domestic because I only care about what's going on in the U.S.

I want to know what U.S. consumers are doing.

I’m also focused on non-financial companies because, with interest rates doing what they're doing, that can create some distortion. I don't really care what Morgan Stanley is doing, for instance.

I want a macro-economic view. I want to know what companies are doing and planning and where the money really is flowing.

So in this chart, the latest data is through the third quarter of 2021. And what you can see is that corporate profits are coming down. But keep in mind this is a year-over-year thing.

That's higher than it's been for practically the past 10 or 11 years!

So we still have some juice in the tank.

To recap: businesses don't have enough stuff on hand to meet consumer demand…

So they're buying. They're expanding.

And they're doing it at a high profit level, meaning they can afford to spend money.

With respect to the S&P 500, we're not quite through the fourth quarter.

Right now, earnings per share growth on a year-over-year basis is 21%.

To put that into context, historically, 15% is considered awesome.

In other words, the profits are so huge and so strong that a lot of companies are looking at things like M&A just to grow because they can't get enough people. (That’s one way to get employees — you buy companies that have employees.)

And I'm going to blow up this chart. 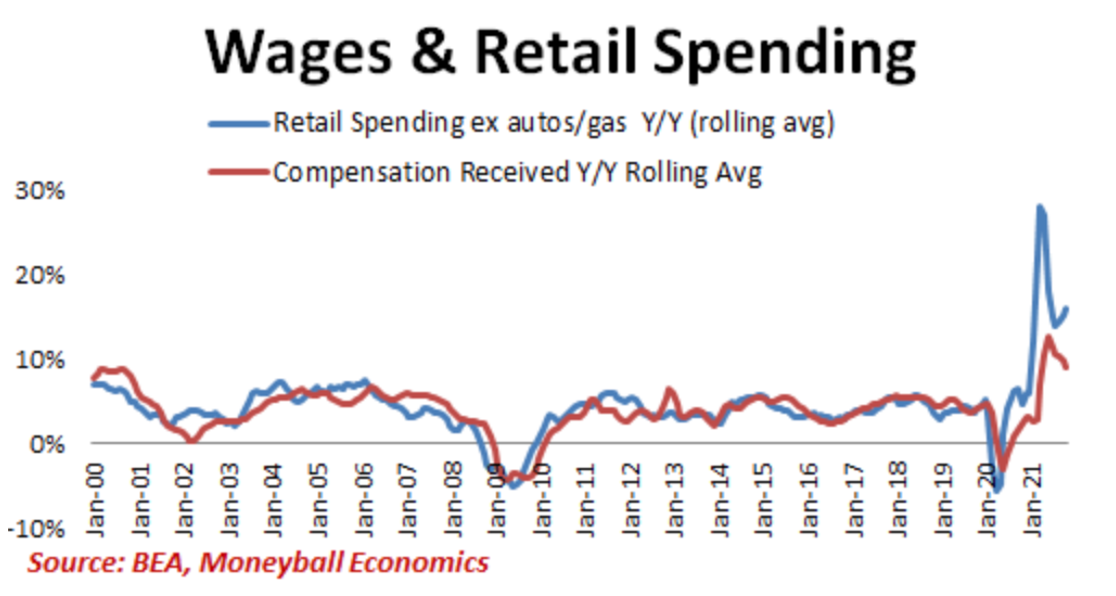 This is an interesting chart because, first of all, it confirms that when people get money, they spend it.

As you can see, the red line is how much money people are making on a year-over-year basis.

And for the past couple of months, almost the entire year, in fact, they've been making more money.

Households have more money in their back pocket than they've pretty much ever had for the past 20 years. And that's why spending on retail has also been so huge.

What does that mean for us as investors?

Growth! Here’s what I mean…

Some people look at companies with respect to valuations. To them, growth is no longer the focus.

Well, I'm here to tell you: valuations, be damned!

Nobody should really care about valuations, partly because the “Price-to-Earnings” ratios will come down as the earnings continue to go up.

In fact, there’s expected to be even more M&A this year than last. These deals have a way of pushing up valuations and keeping them high.

Are they spending it? Yes and yes.

Do they expect to have money? Yes and yes.

So that means concentrate on growth.

Don't worry about the valuations, because a lot of that noise is because money is cheap.

And speaking of money…

If we're going to focus on growth, where are we likely to have the most growth…

Because that's where the upside's going to happen. 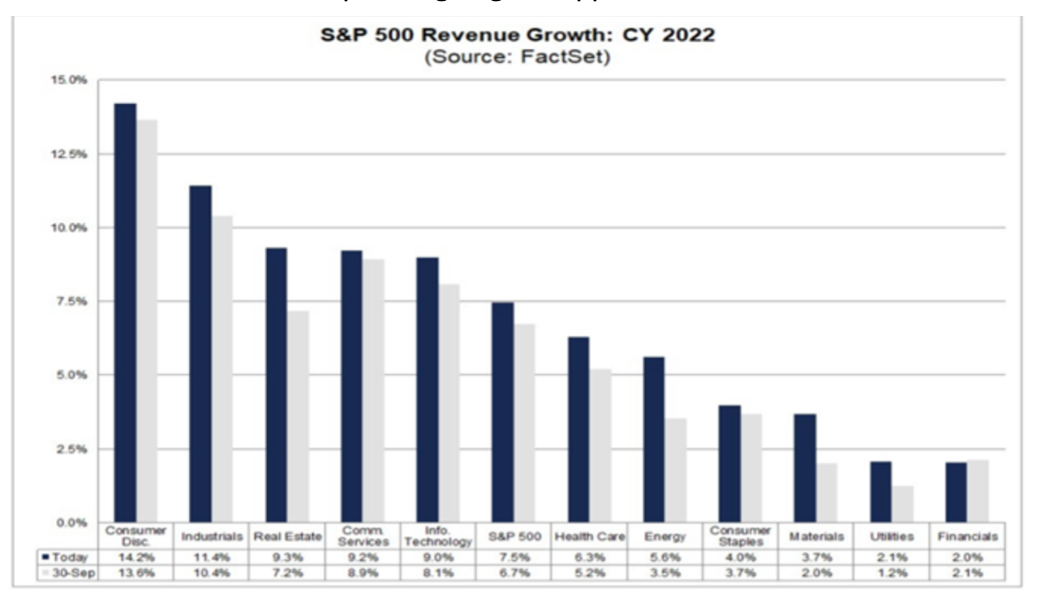 At first blush, this chart might be hard to read, so let me explain it...

This is growth for the S&P 500 companies. And this is basically what companies are putting out to the public as they give guidance for 2022.

In this chart, the black bar is the most recent, and the gray bar is what companies were forecasting back in September.

As you can see, companies aren't just growing. They're growing rapidly — and they’re expecting this growth to accelerate.

Just look at the two fastest-growing sectors in terms of sales: consumer discretionary and industrials.

Let's talk about what consumer discretionary is:

If you've been watching my videos, you know that consumer discretionary includes categories like autos, leisure, hotels, restaurants, and clothing.

Two of the trends that I said I'm watching in 2022 are autos and the leisure space.

In any case, we've got consumer discretionary covered. I've already laid out what trends I think we should be looking at. And I've got specific investing ideas there.

When it comes to industrials, it’s the same deal. There are some underlying elements we can look at.

I believe, for example, that with respect to electric vehicles, the future is now. Electric vehicles are here, and that's part of an industrial investment play.

That's the kind of confidence that creates a positive feedback loop:

If you expect growth, you invest for growth. And that investment kicks off a feedback loop that promotes even more growth.

People will spend money. They have the means to spend.

Even if interest rates go up, they’re still freakishly low.

There's still a lot of money splashing around out there, looking for some action.

Moving forward, expect a lot of M&A to happen…

And that'll continue to juice up valuations.

If there's a buyer out there, prices go up!

In any case, it's been great hearing from you.

Stay bullish, and I’ll talk with you soon.