The People’s Bank of China just dropped a BIG clue on us.

Based on this clue, it’s likely the global economy is about to come to a screeching halt.

But just because the economy’s a mess doesn’t mean you can’t make money in the markets!

So today, I’ll give you three simple ways to profit from the coming downturn.

I know you’re not here for my good looks or personality.

You’re here for my investment ideas!

Particularly because we’ve been crushing the ball lately with our picks.

In recent months, I’ve shared profitable plays in industries ranging from defense to agriculture. And just last week, I told you to invest in retail stocks — and they’ve shot up already.

So today, I want to keep this momentum going.

You see, a recent signal from the People’s Bank of China is giving us a big clue. Simply put, it’s likely that the global economy is about to come to a screeching halt.

But just because the economy’s a mess doesn’t mean you can’t make money!

So today, I’ll give you three simple ways to profit from the coming downturn.

Here’s What Banks Do with Your Money

To set the stage here, let me briefly explain how banks do business:

Customers like us deposit money, and then banks lend out our deposits to others.

The thing is, for every dollar a bank gets in deposits, it can lend it out 10 times. In other words, a $1 deposit becomes $10 worth of loans.

This helps stimulate the economy. In fact, after money is lent out, it often gets re-deposited —so the bank can often lend out the same funds again and again.

But banks can’t lend out every dollar they get…

Each country’s central bank (in the U.S., it’s the Fed) sets what’s called a Reserve Requirement Ratio, or RRR for short. The RRR is the portion of a bank’s liabilities that it’s obligated to hold onto, rather than lend out or invest.

In the U.S., the pre-Covid RRR was 10%. So if a bank had $1 billion in deposits, it could lend out up to $900 million. But during Covid, the rate was dropped to 0%. So banks could lend out every dollar they took in. This policy was aimed at stimulating the economy.

The Tail and the Dog

Last Friday, the People’s Bank of China lowered its RRR by 25 basis points.

Why did it do this? Simple. Because it sees a global economic slowdown on the horizon!

China’s in an interesting position:

As it relates to the world’s economy, it acts as the tail and the dog. In other words, it relies on global exports (the tail) and domestic consumption (the dog).

To explain what I mean, take a look at this illustration of China’s high-speed rail system: 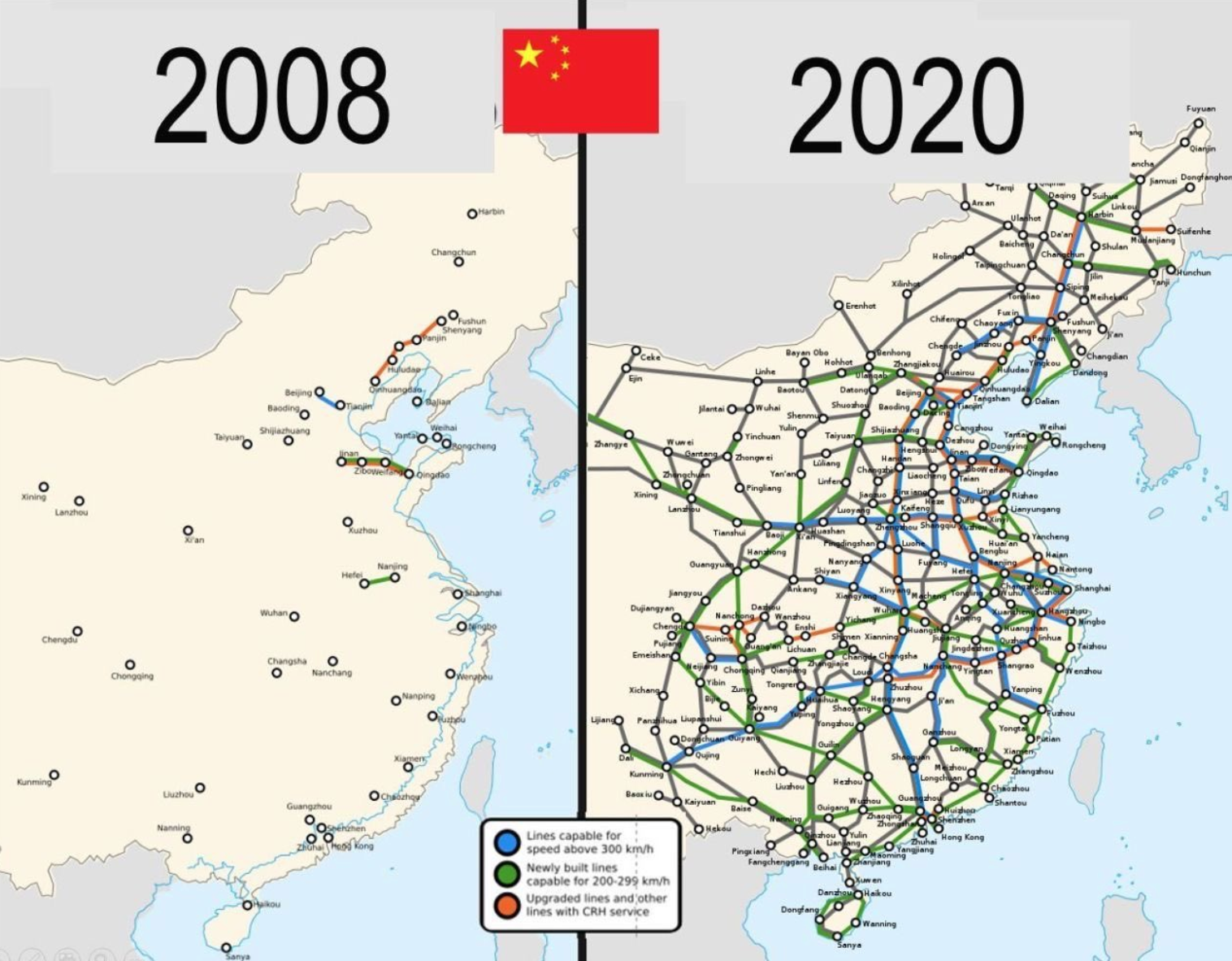 As you can see, in 2008, China’s high-speed rail system was almost nonexistent. But by 2020, it covered the entire country.

What does this tell us? It tells us that, after years and years of building, China is maxing out. And it’s finally on the down slope of growth. Consumer demand has peaked.

That’s why it’s lowering its RRR: it wants to stimulate the economy!

But here’s why this signal has me so concerned…

China’s economic slowdown can only mean one of two things:

Either way, this is bad news for American companies:

The U.S. exports a lot of products to China. So if domestic consumption in China is slowing, that’s bad for American companies that are exporters.

And if demand for Chinese exports is cooling, that means a global economic pullback almost certainly lies ahead.

Now that we know about the bad news, we can start planning for it. Here’s how…

First, be sure to avoid companies that depend on exports for their livelihood. Those companies are about to take a hit.

And now, without further ado, here are three simple ways to profit from a downturn.

As you can see in the chart below, over the past 20 years, the stock price of firearms manufacturer Smith & Wesson (Nasdaq: SWBI) has experienced three surges. And each one was tied to a time of economic strife and/or political turmoil.

Based on China’s RRR reduction, it’s likely we’re headed for a downturn. Furthermore, we’re heading into midterm elections. So this company’s stock could be set for another pop.

If you’re a “Pro” subscriber, I’ve got details on a pick for you that I believe could more than double in the next 12 months or so.

For now, Zatlin out. Talk to you soon.