My #1 Way to Play this Week’s Jobs Data

We’re only a few days into the new year…

But this is a hugely important week for Wall Street.

Why? Because the data is coming — and it’s likely to rattle a lot of investors.

But don’t worry: in my latest video, I’ll tell you exactly what this data means…

And I’ll explain why you only need to do one thing to set yourself up for profits.

My #1 Way to Play this Week’s Jobs Data

Hey, everyone! Welcome to Moneyball Economics.

And let me wish you a Happy New Year.

It's also the first trading week of the year.

And there's a lot going on already.

The theme for 2022 will be interest rate hikes.

Because these hikes will wreak havoc in the market!

For Wall Street, the question isn't, “Are rates going up?” (Because, let's face it, they're freakishly low. And now that the economy is strong, they're going to go up.)

The question is when are they going to go up?

And how much are they going up?

Seriously, it's that big of a spread.

The thing is, when Wall Street isn’t in alignment, you need to focus on the data…

Which is why this week is so crucial.

This week presents a lot of information on inflation.

What I want to share with you today is some insight into the way Wall Street thinks.

And you’re going to feel comfortable with what’s going on.

Comfort is important, because Wall Street is going to get agitated, and I want you to remain cool.

I want you to be thinking, “How do I take advantage of this?”

And today, I'm giving you some very specific ways that you can take advantage of it.

What is Wall Street seeing? And where might there be some divergence from expectation?

This is important — because divergence means opportunity.

Earlier I mentioned that this week is all about jobs, jobs, and jobs.

That’s because we have three different jobs reports coming out, with each one giving a different view.

The first one's going to be “JOLTS” data. (Don’t worry: I'll explain each of these terms to you, and explain why they're important from Wall Street’s perspective.)

JOLTS data looks at a company’s hiring intentions. In other words, how many people are they trying to hire, and what are they facing in the job market? That’s hiring intent.

Second, we've got initial jobless claims coming on Thursday. This tells us how tight the market is, only this time from the employee’s perspective.

These are people who've had to go out and say, “I don't have a job.”

Then finally, it all ends with the biggest report of all: Nonfarm payrolls.

Why is this report so important?

Because buried within this report is data on wage inflation. And wages are the one thing that have a huge impact on inflation.

In a nutshell, if wages continue to go up, inflationary pressure goes up…

And that means interest rates are going to be raised!

Time for a Jolt

This report looks at two things:

Typically, if companies need to hire, and they can't get the people to come on board, they're going to raise wages. 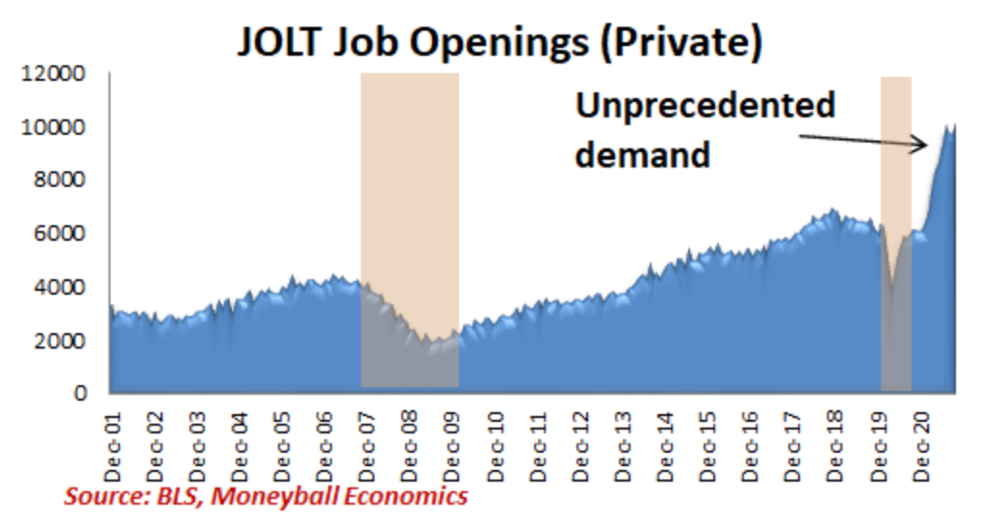 This chart shows job openings data going back 20 years. Where do we get this data?

Well, basically the government goes out and it asks companies, “How many positions are you trying to fill right now?”

And keep in mind that, when it comes to job openings, there's a little bit of lag time between when the employer posts the job and when it fills it.

And it’s unprecedented in a couple of ways:

One is that, typically, when you come out of a recession (as shown in that band spanning 2007 to 2009), hiring is tentative. That’s because the economy is getting back on its feet.

But look at the situation today. There was no tentative hiring — there was just full-blown hiring!

Additionally, it typically takes a few years for the hiring levels to end up where they were pre-recession. But that wasn’t the case today at all!

Not only did that level recover, but we're almost double where we were pre-COVID.

The number of positions that employers are trying to fill is almost twice where it was pre-COVID.

So job demand is huge, and hiring is huge, too. Take a look at this… 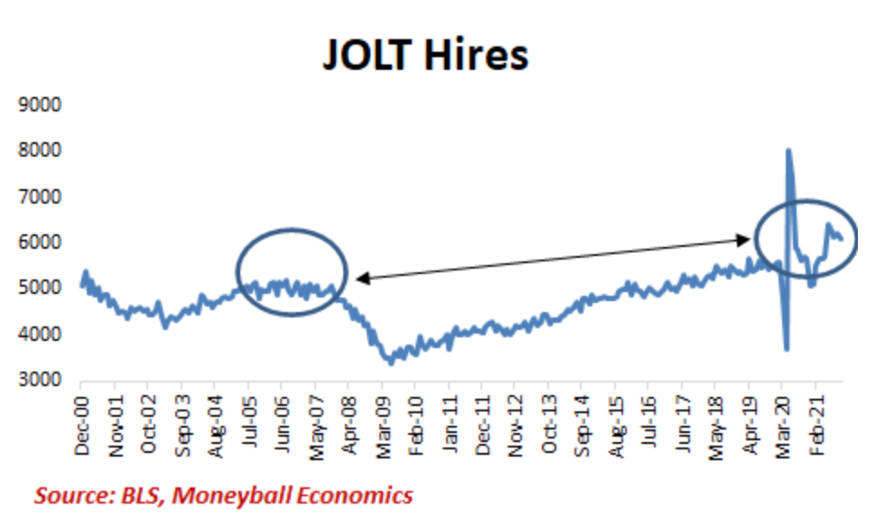 Historically, hires and job openings tended to move in lockstep. Coming out of an economy that was weak, you'd have more people applying for a job.

And so hiring — relative to the number of positions available — tended to be a little bit lower. Employers could take their time and be choosy.

But today, just like with job postings, hiring is at huge levels.

The challenge is — and the key thing that Wall Street's looking at! — how those two data points (hirings and job openings) line up.

And what you'll see here is labor market tightness like you've never seen before.

You can see this line going down. Well, when you’re hiring at 100%, that means for every position you’re trying to hire, you’re able to fill it.

And if it's above 100%, it means you were able to hire more than you needed.

This means for every two jobs, employers are only able to fill one. That's how far demand has outstripped the labor market supply.

And when you get to that place where you've got massive staffing shortages, you also have wage pressure…

And that's what we're focused on right now:

Why Wages Are Key

Wage inflation information is coming out Friday. And we're going to see the following:

On a year-over-year basis, wages always go up. That’s because most people get raises. But look at this: 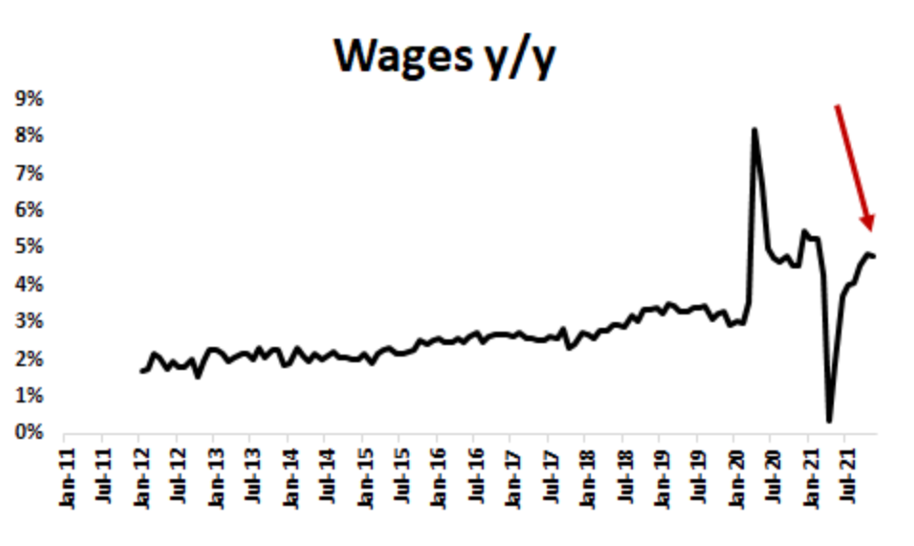 The rate of wages is double what it's been historically.

In other words, the pressure to hire is leading to higher wages.

And let's face it: When you're paying people more money, your costs will go up. That means you’ll have to raise your prices. And that's a key concern.

Now focus on that red arrow:

Wages on a year-over-year basis seem to have plateaued.

But that’s the key here: seem to have plateaued.

We don't know that’s the case quite yet. But for at least a couple of months, even though wages are at a high level on a year-over-year basis, there seems to be a bit of slow-down happening.

On Friday, if wages shoot up again or stay flat, the Fed will be pressured to raise rates.

On the other hand, if wages dip down a little bit, the pressure to raise interest rates goes away. It doesn't go away entirely, but it backs off a bit.

And remember, you've got some people out there saying there's not going to be a hike in rates, while others are saying there will be three of them.

And depending on what happens, the market's going to respond.

We've got a lot of unknowns right now, but this week is going to give us some major clarity.

This is my favorite data point. Here’s why:

When we look at JOLTS or payrolls, the methodology is suspect.

The reason the methodology is suspect is because, years ago, the government went out and asked a handful of companies how things were.

Then it took their answers and made a model out of them. And that’s the model we’re still using today.

So remember: it's just a model. It's like kids playing with tinker toys.

But if we want to talk about the truth, we can get there with jobless claims.

Jobless claims are different from the other two data points, because not only is this information is coming from the employee side, not the employer…

But this data is also comprehensive.

Every city, every person who’s out of a job recently, has to file a piece of paper.

So there's no modeling here.

So what does this data tell us right now?

The number of people who were recently laid off is around 200,000. That figure is historically low — a 50-year low, in fact — a stat you’ll hear plenty about in the media.

The thing is, it’s not just a 50-year low. Fifty years ago, the number of American workers was a lot fewer. The population was a lot smaller.

So for the U.S. to have that level of initial jobless claims against a much bigger population makes it even more meaningful…

It says the labor market is even that much tighter.

You have all these people, and they're all working!

So this is what you want to think about…

A Big Week Ahead

The markets are going to get rattled, because they're going to have three data points:

In short, they're going to have a lot of data this week — data that’ll reveal whether we’re trending toward either a tighter labor market, or one that’s beginning to soften.

Keep in mind: the market doesn't know how things will turn out yet. The market's going to be nervous. Therefore, the market’s going to respond in a big way...

Big picture, here’s the trend that should be driving your investments:

Keep in mind — I’ve got some specific ideas I’m going to share with you about how to take advantage of this higher level of spending. So stay tuned.

But for now, here’s what I want you to take away from this:

This week, despite the agitation in the market because of all this data, stay cool.

Don't let the gyrations affect you.

The economy is growing…

And that's good for the stock market.

So for now, Zatlin out.