Bullish or Bearish? How to Approach 2022

So as we head into 2022, how should we be investing? Is it time to be bearish, or to run with the bulls?

In my latest video, I’ll start telling you exactly what to do…

Bullish or Bearish? How to Approach 2022

If you're like me, you're invested in a handful of themes and ideas…

Or if it's not consistent, that you make some tweaks to get back on the right path!

Well, as we roll into 2022, I'd like to share my investing ideas, as well as the data that's behind them.

So over the next couple of weeks, I'll be sharing a bunch of these ideas with you.

Looking at the “Big Picture”

Let's start off today looking at the “big picture”…

Well, to cut to the chase here, you should be bullish!

But still, we need to answer some core questions here like:

The Data that Matters

So with that in mind, I'd like to show you some of the data that matters — some of the recent data.

Because it’s suggesting that next year's going to be a little spicy! Even spicier than we expected.

So right off the bat, should we be bullish?

You've got to be bullish when you've got a strong economy!

And that's what we have right now — in fact, we've got a super strong economy!

So, simply put, we have an economy firing on all pistons!

Let's take a look at the latest data: 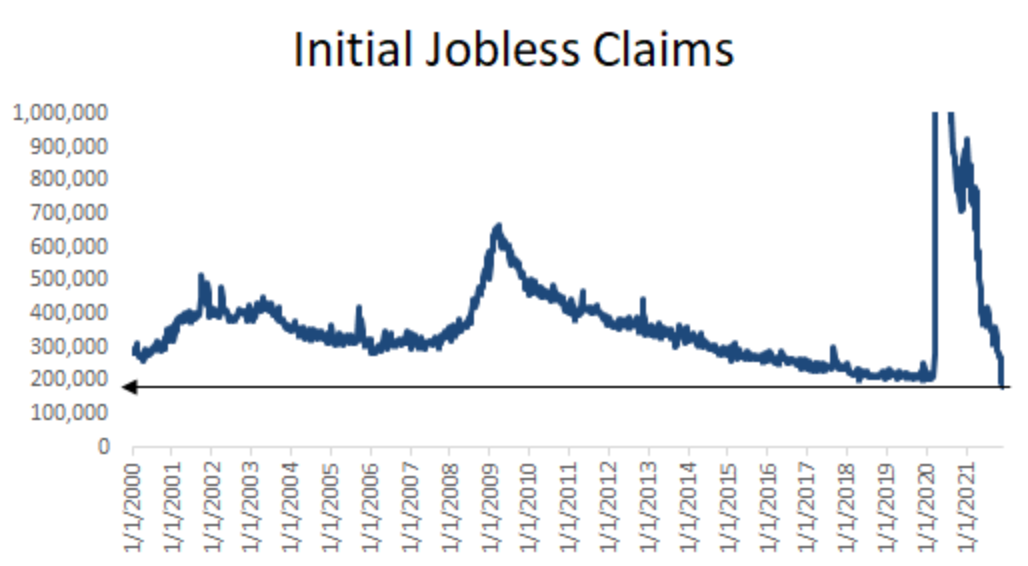 First of all, jobless claims came in at a 52-year-low.

We haven't seen this since we had the wartime economy of Vietnam in full force!

And keep in mind, the U.S. recently got out of Afghanistan…

So we're actually in a reverse wartime economy!

This is a very strong labor market.

So the question is: Is this a trend, or is it transitory?

[Zatlin with conviction] Well, I'm here to tell you it is not, not, not transitory!

This is a big ongoing trend! And now let me tell you how I know…

You see, beyond the mainstream data that everyone looks at, I've got my own data.

For example, here’s a snapshot of some proprietary data that I look at: 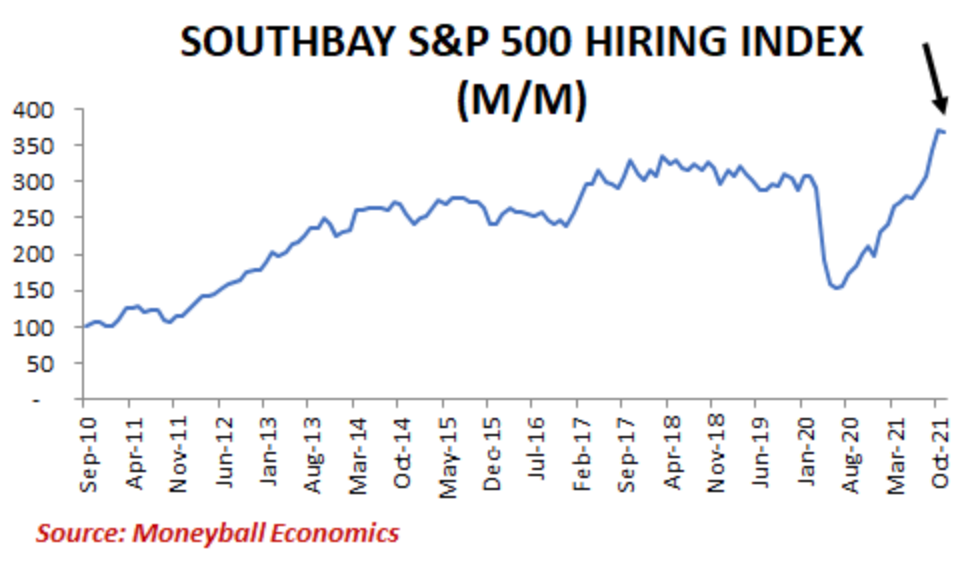 Basically, I collect hiring data. And this chart shows a slice of my special data.

This shows me what the biggest companies in America are doing. This is the S&P 500. This is their hiring.

As you can, it shows what’s going on month-to-month — and you see that we are at unprecedented levels!

And it’s not going down any time soon.

This shows that companies are hiring.

And the takeaway here is that, going forward, companies will be putting more money into household pocketbooks because there's more people employed!

At the same time, wages are going up — and companies are seeing a lot of demand. That means sales!

The bottom line: there's a lot of economic activity going on.

Meanwhile, I see the same thing happening on a year-over-year basis. 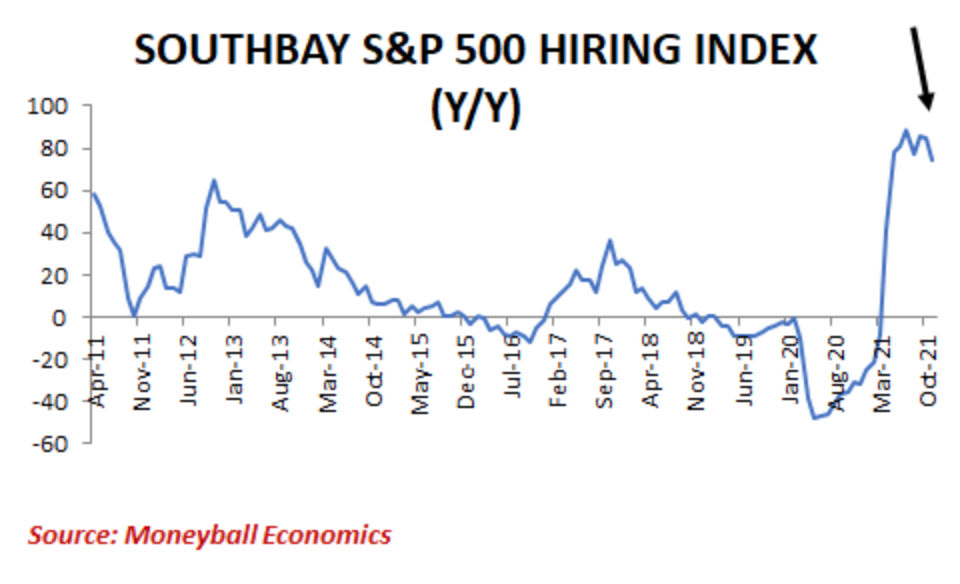 This is unprecedented. This is huge. This is an economy that is super strong!

So the question is: Should we invest in it?

Of course! You always invest in a bullish economy! You go long and strong!

What “Flavor” of Bull Is This?

But now let’s get more nuanced:

What “flavor” of bull market are we looking at?

Because we’ve got a highly inflationary economy already… and now the government is talking about throwing another $2 trillion of stimulus into play.

[Zatlin with emphasis] This… is… dangerous!

This is basically what some people call a “policy error.” Because there is absolutely no reason, no justification, to do any form of economic stimulus.

Sure, 10 months ago, conditions were different. They were bad.

But today? Today the economy is strong. And it’s not transitioning away from that strength. So why throw $2 trillion at it?

Short answer? It's not about right or wrong:

It’s about winning the election in November next year!

And quite frankly, the Democrats are desperate. They are not in a good position.

And there are two reasons for this:

As Trump recedes and we go into two years of Biden, now we come to the second point:

The Democrats have to defend what they’re doing.

And quite frankly, the American public isn't seeing a lot of positives right now.

That’s why they’re trying to “buy” the election by putting $2 trillion out there.

And frankly, I think what's happening is a big problem.

Now, we could see some guys like [Joe] Manchin or a few other Democrats raise their hand and say, “We don't need this.” So this $2 trillion package doesn't move forward.

But let's consider what happens if this package is a “yay.”

Here’s What Happens if it’s a “Yay”

Let's say we get the infrastructure bill out there — another $2 trillion spent! — and the economy goes from hot to white hot. Well, as a result, we’ll get even more inflation…

And that could force The Fed to be even more “hawkish” — in other words, instead of just a small interest-rate hike, maybe it’s a big one — like more than 25 basis points.

In other words, we get uncertainty injected into the economy and the investing environment.

It means a lot of gyration in the stock and bond markets.

So you need to invest accordingly:

That means: buy the dips and sell the surges!

OK, so that’s what happens is the vote on infrastructure is a “yay.”

Here’s What Happens if it’s a “Nay”

The “nay” happens if somebody wakes up and says, “No — no way. We're not doing this.”

And in that case, you have a lot more predictability!

Basically, rates won't move up as much because The Fed won't be forced to counter the fiscal stimulus with monetary contraction.

We don’t know yet which ways the wind will blow. But over the next few weeks, we’ll find out.

Bullish — With Some Fine-Tuning To Come

Be bullish — and be prepared to do some “fine tuning” as we learn more.

With that in mind, next week so we’ll look at some other investing ideas…

For example, if we're going to be bullish, where exactly should we be placing our bets?

That’s where we'll pick things up next week.

Until then, take care!