Downtowns Are Dying — Here’s How to Profit

In her classic song “Downtown,” Petula Clark claimed, “Everything’s waiting for you downtown.”

But that was sixty years ago. Today, America’s downtowns are dying.

Here’s how we can profit from their demise.

Downtowns Are Dying — Here’s How to Profit

In 2019, it tried to re-sell it for $100 million. But no one was interested. Since then, the asking price has gotten lower and lower. Today it’s listed for just sixty million dollars.

And why investors like us should be paying attention. (Hint: money-making opportunities ahead.)

From Downtown to Ghost Town

To back up for a second, I have to tell you something: I left out some key information regarding the Craigslist property.

You see, when it was listed in 2019 for $100 million, the building had a seventy percent occupancy rate. But today, occupancy is at just twenty-two percent!

It’s one more example of how the population of downtown San Francisco is disappearing.

And cities all across the U.S. are experiencing a similar situation. Let me show you: 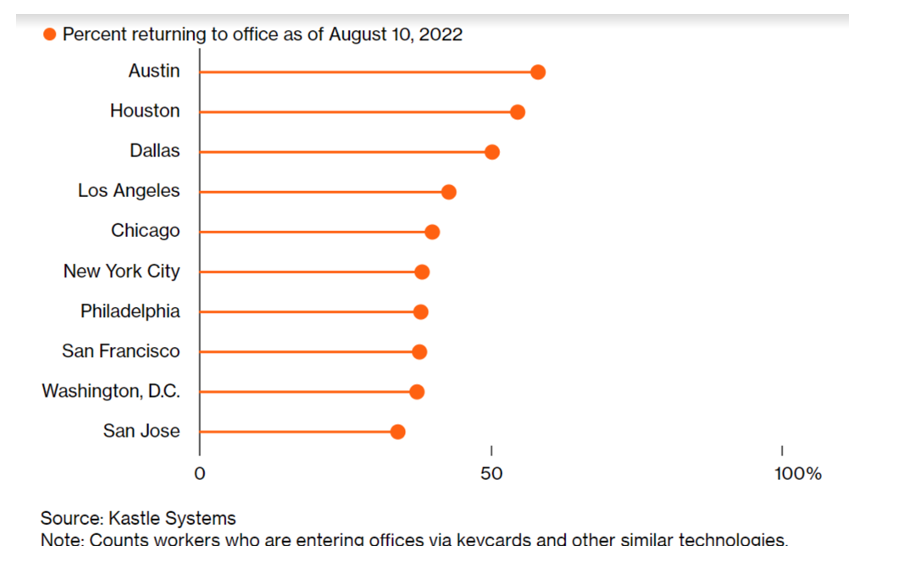 This chart shows the percentage of people returning to offices in cities like New York, Los Angeles, and Chicago (as measured by people using office key-cards). Occupancy rates are only about half of their pre-Covid levels.

Where did everybody go?

Before Covid, five percent of employees worked from home. Today, that number is twenty percent.

That’s an estimated nineteen million fewer workers going into the office every day.

Consider the impact of that shift. Historically, downtown regions have been the engine of economic activity and of tax revenues.

Cities collect taxes from business rent, from parking fines, even from the Starbucks lattes sold every morning. Speaking of Starbucks…

Focus on the Ripple Effect

When it comes to downtown’s demise, I’m not focused on commercial real estate companies. I don’t shed a tear for them.

Instead, I’m focused on the companies whose dependency on a thriving downtown may not be so obvious. For example:

Life Time Group — This fitness company (NYSE: LTH) specializes in downtown gyms, so employees can go from work to working out. When Covid hit, this company lost half of its revenues.

ABM — This is one of the handful of publicly traded parking-lot managers (NYSE: ABM). With millions of people working from home, ABM is bringing in less and less money. There’s already been a downward revision of its earnings forecasts.

Starbucks — Every day, the coffee juggernaut (Nasdq: SBUX) sells millions of cups of coffee to downtown workers. How far will its sales drop when all these workers stay at home?

The reality is that work-from-home is here to stay.

And for the companies and sectors that depend on a vibrant downtown, there will be big struggles ahead.

But if you’re a Moneyball “Pro” subscriber, I’ve got a trading idea for you that could deliver substantial profits in this new environment.