Get Out of Bonds… Now!

You know, a funny thing happens when interest rates rise:

Your bonds get crushed!

So in my latest video, I’ll explain why a certain piece of your financial future could be in for a rough ride…

And I’ll tell you what to do right now to ensure smoother sailing.

And welcome back to Moneyball Economics!

As I mentioned last episode, I’ll be sharing some 2022 investment themes with you.

The very first one?

To kick things off, let’s talk about how to “rate-proof” your portfolio.

OK, so I’m going to let you in on a dark, dirty secret…

It has to do with the financial advisory business.

And make no mistake, it is a business.

I want to break this secret into two parts:

When you're at such a big inflection point — where you need to make major changes to your portfolio because rates are about to move — you want to find out if your financial advisor is actually advising.

In other words, are they actively working in your best interests?

And guess what? Odds are, they aren't.

Don’t worry. I'm going to explain everything — because there are some deep, dark, dirty secrets to share.

Interest rates are going up. And here’s what’s important to know:

It's not necessarily good or bad for the stock market, although certainly it can be bad. But it tends to be a situation where there are winners and losers.

But if you’re a bond holder, that'll mean taking the fast train to “pain city.”

In case you're not clear about this…

Bond prices and yields move inversely. They move in the opposite direction.

I won’t bog you down with all the mechanics of why... but this is a fact.

So when interest rates go up, the value of bonds goes down.

For example, if you’ve got $1 million worth of bonds right now, guess what?

In short, you’re going to be losing a lot of money if you sit on bonds.

To demonstrate this point, let me share something with you… 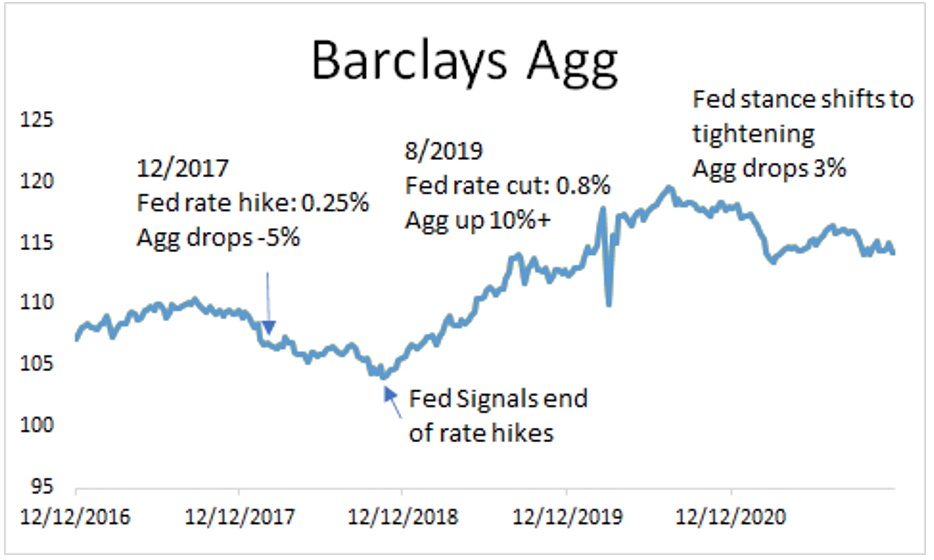 This is the premier benchmark for all bonds. It lets us know what's happening in the bond market.

There's a lot of opportunity here for complexity, because there are many different types of bonds:

And people will argue about what's happening with the overall bond market based on only one of them.

But that's like arguing about the status of the overall car market because [Zatlin mocking tone] “SUVs might be moving a certain way.”

Hey, you know what? Anyone who creates complexity is trying to confuse you. They’re not shooting straight.

Instead, just look at this chart — it gives you a simple view of what's really going on.

There are four times in the past five years where we've seen an inflection point in interest rates.

That was an election year. But it was also a very recessionary time. The economy was not doing well.

But then President Trump comes in. And what’s he do?

Boom! A tax cut right off the bat in 2017. And the economy takes off amazingly!

So The Fed comes in in late 2017. And what do they do? They raise interest rates!

The next thing you know, the Barclays Agg — basically the aggregate view of what's going on with bond prices — goes down 5%.

And to be honest, it was already drifting down prior to the rate hike because everybody knew that rates were going to move.

And as I’ll explain in a minute, everyone knowing is a key part of what you want to pay attention to...

In any case, 2017 is a great year, everything's going great…

That’s when The Fed starts talking about “no more rate hikes.”

And then you start to see bonds going up. Why?

Well, because if there are no rate hikes, then eventually there’s going to be rate cuts — and bond prices will move up.

Sure enough, the Agg starts drifting up from about 98 (as shown on the chart), and then it moves up really fast.

The Fed is no longer talking. It’s acting. Pretty much from late 2019 on, The Fed cuts interest rates almost a full point. And the Agg has since moved up 10%.

So what do we know so far?

And as soon as they actually make the rate cuts, bond prices go down!

But keep in mind, the opposite is also true:

As soon as The Fed starts to signal that it’s going to get a little loose (i.e., that it’s thinking about lowering rates), bond prices start to go up.

And as soon as they pull the trigger (in other words, they actually lower rates), bond prices really go up.

Sure enough, The Fed’s been talking all year — starting in late 2020 and into 2021 — about looking at raising interest rates.

Well, obviously, they’re going to raise — because we were at 0%, so the next step would be a hike!

We're basically repeating where we were in 2016, going into 2017, where we expected rates to go up. And what did we see?

The “Kiss of Death”

So if you’re an investor right now, why would you be invested in bonds?!?

Look at these inflection points on the chart...

They carry over for a couple of years. It takes a while for these things to play out.

So this isn't a short-term, “get in, get out” move. It's just logic. It's just simple logic!

Interest rates are going up…

And that is the “kiss of death” for bonds.

Get out of bonds!

Seriously, I’m not sure why we’re still talking here…

Pick up the phone, call your advisor, and get out of bonds!

There was a big recession and rates were cut.

But look where we are now:

Simply put, there are no positives for the bond market right now.

So you’ve got to ask your advisor right now:

In my next article, I’m going to talk about how to work with your investment advisor…

I want to make sure they’re on your team — and not just working for themselves!

Talk to you soon!