How to Play the "Choke Point" Profit Strategy

Ford, Tesla, and GM are going to war to dominate the new world of electric vehicles.

But who’s going to come out on top?

In my latest video, I’ll explain how you could come out on top…

Regardless of who wins the war!

How to Play the “Choke Point” Profit Strategy

I'm Andrew Zatlin. And I'm coming to you from a hotel room in Hawaii.

My family's still asleep, so I’ve got to be a little bit quiet here…

But as we close out the year and look to 2022, I want to share my thoughts, loud and clear, for how to position yourself for financial success.

So without further ado…

Rates are in motion. And that's creating a lot of volatility.

So I want to be positioned to take advantage of that.

Another short-term trend relates to COVID. We're rapidly getting back to normal here, even with the Omicron challenges in the near-term.

And at the top of my short-term list right now is travel.

But I also want to think longer-term:

Where do I want to be positioned?

The answer is electric vehicles — this trend is mainstream now.

Why do I say it's mainstream?

Well, today I'm going to share with you how the industry has gone far beyond Tesla, and what the implications are.

Instead, it’s an absolute, definitive game-changer.

Now, you're probably aware of electric vehicles as a “Tesla thing.”

Tesla's taking something really basic (an electric car), and adding a lot of bells and whistles — features like auto-drive, for instance.

But today, let’s look at electric vehicles as an alternative to the internal combustion engine.

And really, it just makes a lot of sense for us to convert to an electric engine and away from internal combustion.

And as we do that as a society, it's going to happen rapidly.

And there are going to be some clear winners.

So I want to get on top of that because the Biden administration is driving this industry forward.

And let's face it: government money tends to create opportunity.

But it's not just government money…

Sure, it may start there. For example, President Biden recently came out and said “50% of U.S. cars should be electric.”

So there's a lot of room for growth there.

But beyond the government, we’re seeing the private sector stepping in.

The Battle for EV Supremacy

Additionally, Ford’s CEO recently said, “Hey, that [600,000] that Tesla's making? We're going to beat it.” In other words, Ford is putting its money where its mouth is.

How much money? Consider this…

With respect to Ford, we're talking about $11+ billion investment in building new plants — real money getting put into this opportunity.

Ford wants to be at 40% electric vehicle production in just a couple of years.

Not to miss a beat, General Motors stepped in with the exact same type of pitch.

In fact, it pledged to build even more EVs.

And that $11 billion that Ford put down? That's chump change, says GM. Try $35 billion on for size.

Keep in mind, this is factory spending. This is buying a lot of equipment.

So clearly, in the EV industry, there are going to be some winners.

But, big picture, you get the idea: a lot of money is going into to electric vehicles.

We've got an alignment of several waves. We've got convergence…

And probably the biggest wave to be aware of is it just makes sense for the consumer. Here’s why…

A Cheaper Set of Wheels

Think about it: You've got moving parts in an internal combustion engine that you don't have in EVs.

Yes, you're trading out some of these mechanical parts for electric parts — and recently, semiconductor prices have shown how that can sometimes be a little dicey — but by and large, the cost of owning an electric vehicle is just cheaper.

Furthermore, an internal combustion engine is constantly heating. It's wearing down parts. It has way more parts than an EV.

And that's just the difference today…

Remember, the U.S. is making 17 million cars a year. And less than a million of those are electric.

As we get into higher and higher volumes, and production becomes more efficient as the industry scales up, consider the implications:

If today it costs half as much to own an EV, imagine what it's going to be like when we hit serious volumes.

The Choice is Yours

So from a consumer standpoint, EVs are just cheaper to own…

And then you start to look at the infrastructure.

Let's face it: EVs broaden the source of energy. Ask yourself, where does the electricity come from?

The answer is multiple places. For example, it could be solar. Heck, you might have solar panels on your roof that could be converted to juicing up your car.

Furthermore, right now, we're totally dependent on oil. And that's been a bad thing in a number of ways. Quite frankly, oil is a monopoly, and we don't have choice.

However, once you insert choice into a consumer environment, that creates competition…

And all of a sudden, you'll see lower costs.

There's also another place where this alignment of various waves are coming in and converging and creating a lot more tailwind.

It relates to this realization:

Getting out of the oil business for the U.S. government is probably a good thing.

For roughly 80 years, America has been committed to oil and maintaining our access to oil because, let's face it, oil has been the lifeblood of the U.S. economy.

And that had some downstream problems.

For one, oil reliance is problematic. It gave a lot of power to a lot of countries in the Middle East. And that was very costly and created ethical dilemmas.

And that’s led to some unproductive relationships.

Send in the Troops 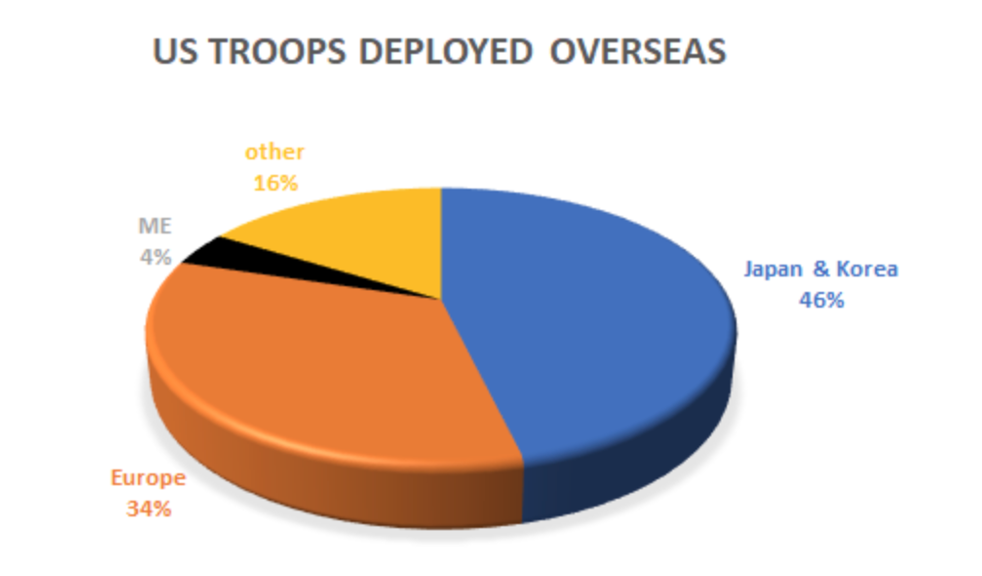 Those troops are deployed to three main areas:

The first noteworthy one is Japan. This represents about 50% of our overseas deployment. And you might wonder, “Why are we there? World War II ended in the 40s.”

Well, it did end. But the Russia, China, and U.S “trilogy of war powers” is still out there. Japan faces both China and Russia.

So that's why we have the bulk of our overseas troops deployed there. It’s a way to contain China and Russia.

The second area is also Russia-facing. It's over in Europe, where we have our second largest deployment. That’s because the U.S. is in a constant state of war with Russia and/or China.

So that explains our deployments. It's a military situation.

Problems in the Middle East

The third biggest place where we have troops deployed is the Middle East.

Why are we in the Middle East? Because we depend on oil…

And we need to have a large Naval presence and military presence to make sure that that oil flows to us.

Instead, it goes to China. Most of the oil coming out of the Persian Gulf actually heads to China.

And in fact, that leverage we have is fading. China is building its own pipelines so they can be weaned off dependence on U.S. Naval dominance and America’s finger on its ability to get access to oil.

The bottom line: oil is problematic. It's polluting. We’ve spent roughly $200 billion a year for the past 20 years to ramp up our presence in the Middle East, $200 billion a year to maintain our access (or at least to keep the world's access to oil flowing smoothly). Another $20 billion goes to direct subsidies.

At the end of the day, we're spending a ton of money because of our reliance on oil.

So that’s why, from a spending perspective, it makes sense to get away from oil as much as we can when we can.

And electric vehicles are a means to do that.

Invest for Today, Not Tomorrow

There are a lot of things going on here.

But the bottom line is this:

And it makes a lot of sense to create alternative ways to get energy into electric form and into automobiles.

From a consumer standpoint, electric vehicles are just cheaper. They really are.

And once we get to volumes, they'll be even cheaper.

So the question is: is this a “today” thing? Or is it a “tomorrow” thing?

Well, it's a today thing.

When you've got companies like Ford and GM jumping in and spending tens of billions of dollars on EVs, there are some companies that are going to win from that.

Invest in the Choke Points

That’s why the question becomes this:

Where do we want to invest?

I'm a big believer in investing in choke points — areas where the dependence is strong, and pricing power is even stronger.

Right now, the biggest choke points in electric vehicles are semiconductors and batteries.

In fact, batteries have two challenges:

One is production — getting lithium and getting batteries made in volume.

Remember, between Tesla, Ford, and GM, we’re talking about needing a couple of million batteries for the U.S. market and Chinese market.

And so the battery producers and anyone in those component spaces are going to be sitting pretty.

On the “flip side” though, batteries wear out. And when they wear out, we dispose of them and then replace them.

Think of them as being similar to an internal combustion engine. These engines are expected to last about 200,000 miles, and then you get rid of them.

It’s the same thing with batteries. If you've ever owned a laptop, you know those batteries don’t last more than a couple years before you have to start thinking about a replacement.

It’s the same predicament with electric vehicles. Their batteries can be stretched out, they can be prolonged…

But eventually, the question becomes, “What do we do with those batteries? Do we junk the car because the batteries don't work? Or are we going to see an interesting world where car life is actually pretty long and we just have to worry about the batteries?”

So there'll be an opportunity there, for sure.

And besides batteries and semiconductors, there are other opportunities, too…

There are only a couple of companies out there they'll turn to for tools.

In any case, as you think long-term, consider this:

Now that EVs are going mainstream…

Now that these companies are putting money where their mouths are…

Now that they're ramping up production…

You need to look at the suppliers that are going to help them meet their targets.

There are quite a few out of them out there — and over time, I’m going to show you the best of them.

That’s it for today. Zat man, out!

Talk to you soon, and Happy Holidays.