I just earned a 500% return on a single stock — in three months.

Today, I’ll show you how I did it.

Then I’ll show you how you could do it, too.

And I did it in just three months.

Curious how I did it?

Wondering if you could do it, too?

When I see a market opportunity, I’m the kind of investor who likes to put some money into it, and then give it some time to play out.

One of my favorite ways to play this strategy is to trade options.

Today, I’ll show you a specific trade I made so you can see how it works…

And I’ll also give you a few general guidelines — so if you try this strategy yourself, you can aim to minimize your risk and maximize your profits.

An Opportunity in the Steel Sector

As an investor, you always need to have an investment thesis — a belief that a trend or event is going to happen.

A few months ago, in January, I found just such an opportunity. I felt strongly about an opportunity in the steel industry. There were several reasons why:

Furthermore, I had my “secret sauce” — my hiring data.

This led me to America’s largest steel producer Nucor (NYSE: NUE). As you can see below, Nucor’s hiring started to climb last year. And toward the end of 2021, the growth really took off: 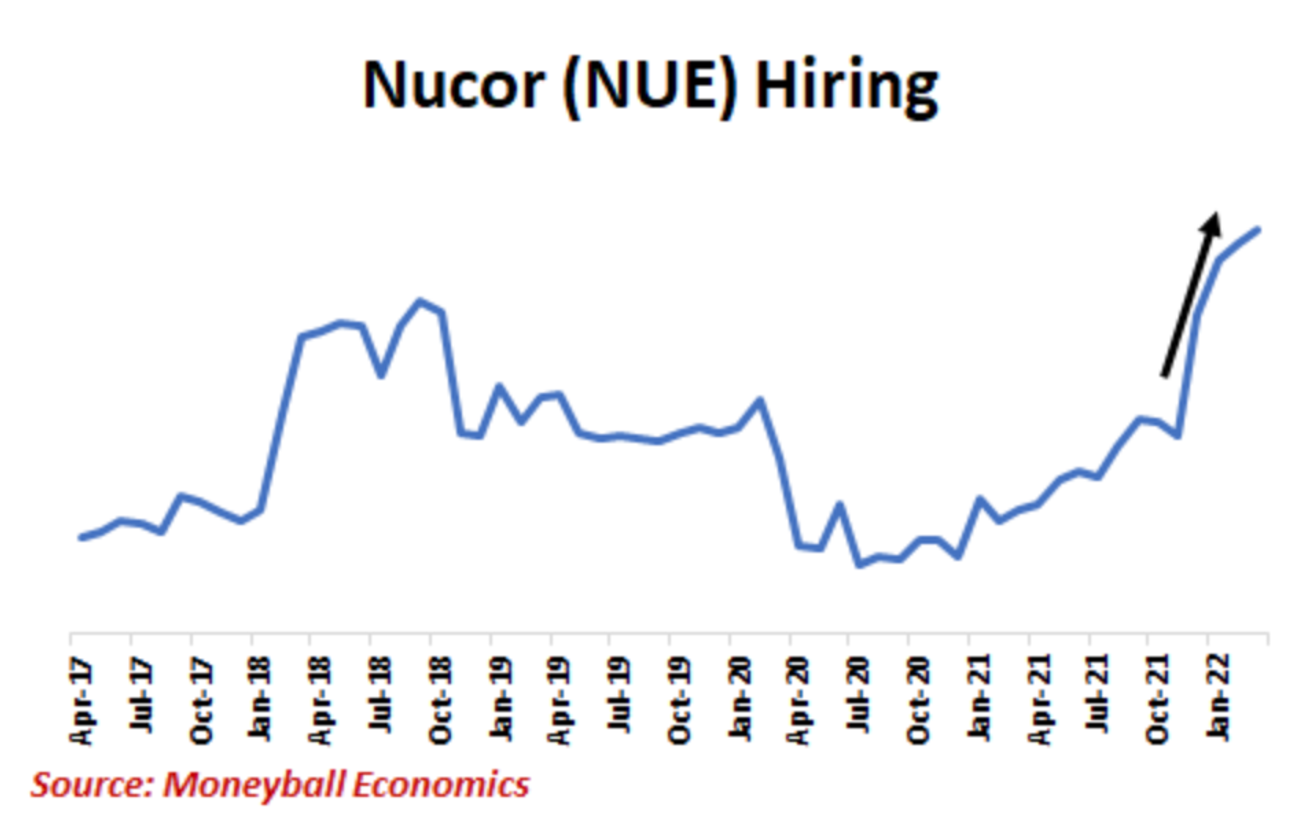 I liked what I saw with respect to Nucor’s potential.

So here’s what I did…

Less Money Down… Plus More Upside

Since I believed Nucor was undervalued, I could simply have bought its stock.

But its stock was trading at $93. So buying a decent-sized position would have been expensive.

So instead of buying Nucor stock outright, I bought an option on Nucor stock. Specifically, since I thought its stock price would go up, I bought what’s called a call option.

A call option gives you the right (but not the obligation!) to purchase a certain stock, at a certain “strike” price, up until a certain expiration date.

For stocks that trade a lot, there will generally be many different call options to choose from, with various strike prices and expiration dates.

(To be clear, those options gave me the right to buy the stock for $100 a share until January 2023 — regardless if the stock was actually trading for 10 cents a share, or for $1 million a share.)

And if the stock continues to rise, my options will get even more valuable.

Keep in mind, options are a high risk/high reward way to invest.

If, on the other hand, I’d simply bought the stock, I could continue to hold it until its value was realized. And I wouldn’t lose 100% of what I invested unless it literally went to zero.

Given this risk, I always follow a few key rules of thumb:

I’m sharing many more details about this strategy that can help you become a Pro yourself!