Invest in Bonds Now, Before This Happens

At the moment, the Fed seems hell-bent on creating a recession.

But before long, it knows it’ll have to switch gears and start lowering rates.

This is creating a straightforward profit opportunity.

And today, I’ll reveal what it is.

Invest in Bonds Now, Before This Happens

Why? Because it thinks the economy’s still going strong.

The Fed says the economy can handle a few more rate hikes, and the market agrees.

The thing is, they’re both dead wrong! The economy’s in trouble already.

But as I’ll show you today, with one straightforward move, we can put ourselves in position to profit handsomely from their mistakes…

The Transportation Sector Reveals a Clue

To show you what I mean, let’s take a look at the transportation industry.

A year ago, people were buying more stuff than ports could handle. The New York Times ran a story called “What America’s Port Crisis Looks Like Up Close.” As it mentioned, “an enduring traffic jam at the Port of Savannah reveals why the chaos in global shipping is likely to persist.”

Even this summer, Business Insider noted “the supply chain crisis could last into 2023.”

The problem was that demand was outpacing supply. But that was last year.

Earlier this week, the CEO of shipping company Maersk said container shipments will be down four percent for the year. This includes a double-digit drop in the second half of 2022. As he said, “Plenty of dark clouds are on the horizon.”

What’s going on here? Why did this transportation boom suddenly turn bust?

Keep in mind, during Covid, people bought new appliances, new TVs, new barbecues. But that demand came at the expense of today’s demand…

In other words, people bought all this stuff a year ago, so they’re not buying it now. 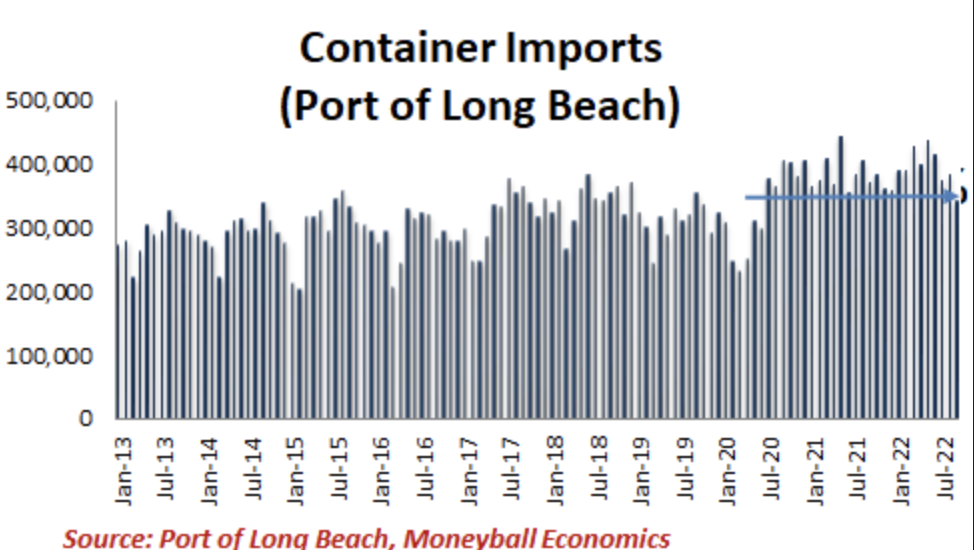 Imports are at their lowest level since 2020. And in Los Angeles, the situation is the same: 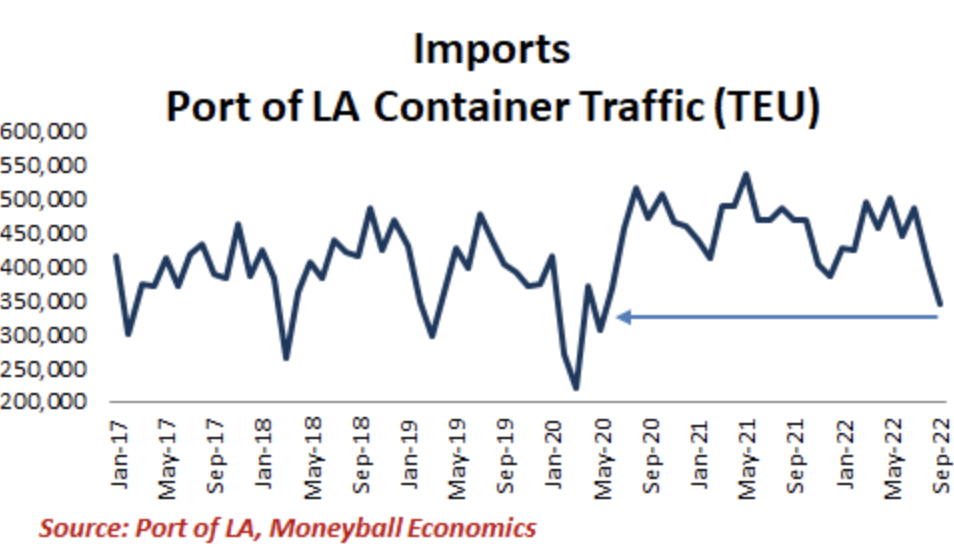 As Maersk’s CEO said, “I’m no economist, but I would be surprised if Europe is not in a recession by now, and the U.S. is likely to follow some time next year.”

At the same time, a pullback in demand is driving down the cost of shipping. Take a look: 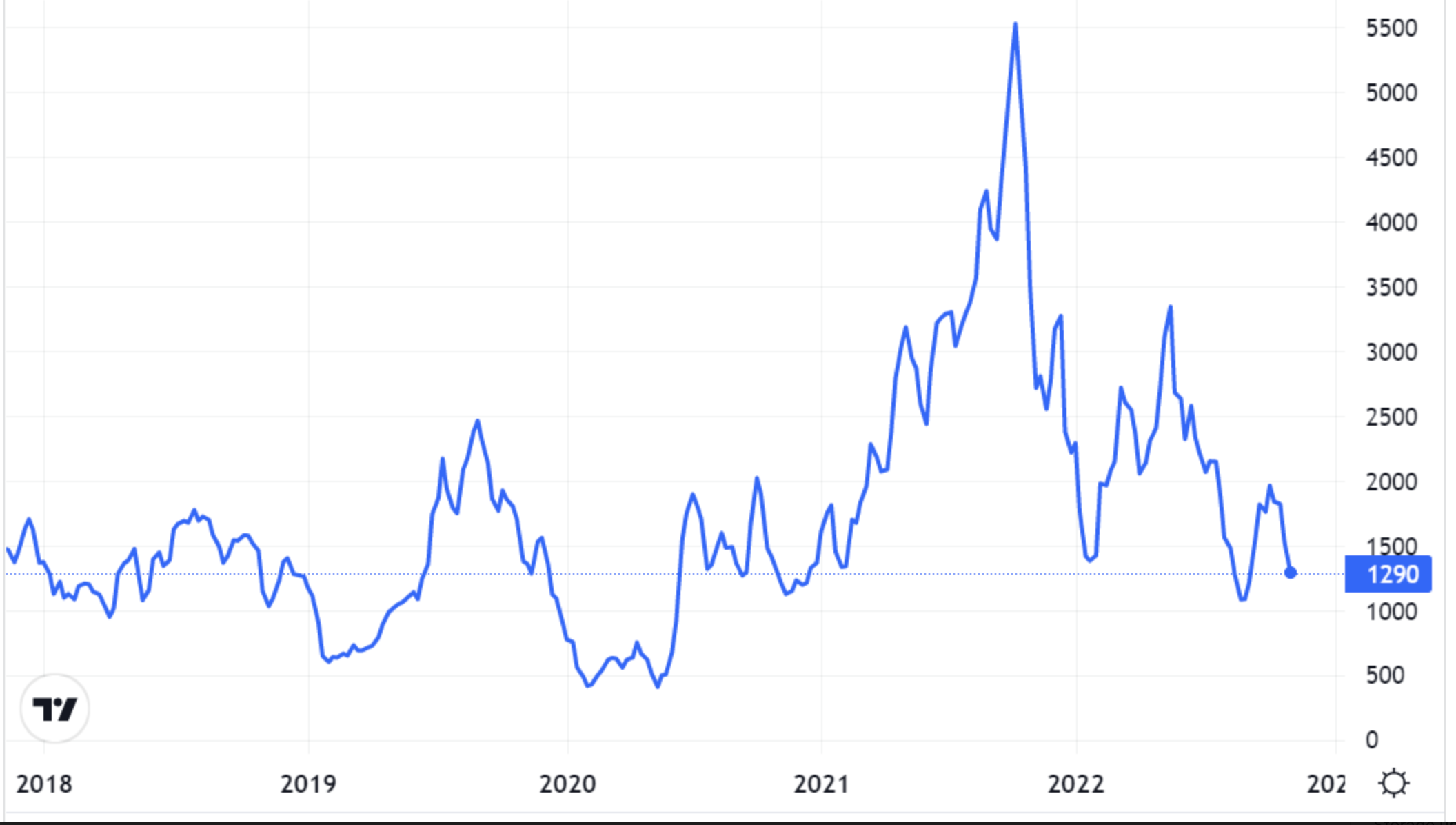 This is a five-year snapshot of the Baltic Dry Index — it shows the cost to ship a container. Notice it’s down eighty percent in one year. It’s the same price now as it was in 2018.

But prices aren’t just falling in the transportation sector…

Remember, the Fed keeps raising rates to curb inflation, even if it means killing the economy. And a big chunk of the overall economy is housing.

The Fed’s actions have already cooled the housing market considerably. Here’s a chart showing spending on residential housing over the past year: 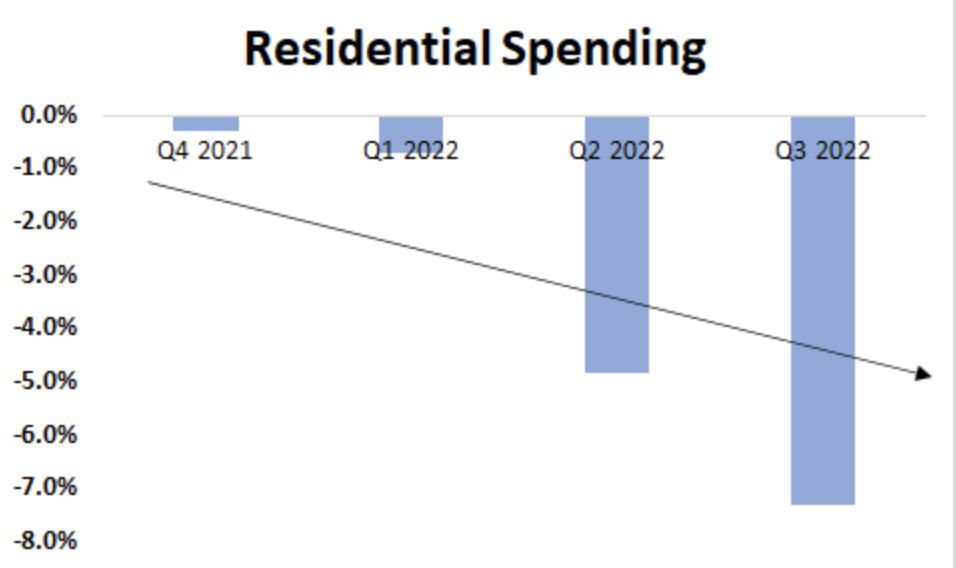 We’re almost at double-digit contraction in this sector quarter-over-quarter.

Bottom line: prices and spending are falling rapidly. That’s indicative of a recession on the way.

So, how does this all play out?

Eventually, the Fed will need to switch gears — and start lowering rates.

And that’s exactly what investors like us should prepare for.

So when rates go UP, prices go DOWN.

And when rates go DOWN, prices go UP.

So if you invest in bonds now, before the Fed lowers rates, you’ll be able to reap the rewards when rates are lowered and bond prices climb.

If you’re a “Pro” subscriber, I’ll reveal a hidden corner of the bond market that’s prefect for this strategy.