"Joe Six-Pack" Is Messing with Your Investments

There’s seventy million of them…

And as it turns out, they have a huge impact on your investments.

“Joe Six-Pack” Is Messing with Your Investments

These hard-working Americans are the “Joe Six-Packs” of our country.

Before taxes, most of them make less than $1,000 a week. In today’s world, that’s not much to work with. But when you factor in the raging inflation that’s been happening recently, it’s clear that Joe Six-Pack will be forced to change his spending habits dramatically.

The thing is, this shift can have a big impact on your investment portfolio.

Consider a company like BestBuy (NYSE: BBY). With Joe Six-Pack spending less on electronics, the retailer cut its earnings forecast by a billion dollars. Its stock price dropped by five percent.

Walmart (NYSE: WMT) is in the same boat. And its stock has fallen almost ten percent.

If you own any big mutual funds in your investment portfolio, odds are, you own shares in at least one of these companies.

This Data Is Yesterday’s News

The thing is, all the data I’ve showed you so far is backwards-looking. It’s already happened. It’s yesterday’s news. It’s the kind of news you’ll read about in the mainstream media.

I focus elsewhere: I look forwards.

For example, I look at the U.S. International Trade Data. Essentially, this gives me insights into what America is exporting — and, more importantly, what it’s importing.

You see, companies need time to import all the products they’ll be putting on their shelves. That means today’s import numbers give us a big clue about tomorrow’s sales numbers.

The newest trade data will be released Thursday, and I’ll keep you posted.

But let me show you what I’m seeing already, because it provides us with a map that shows which stocks we should be in, and which ones we should avoid…

Here’s a chart showing U.S. imports over the last decade. (I took out petroleum and auto spending so we can focus on discretionary spending.) 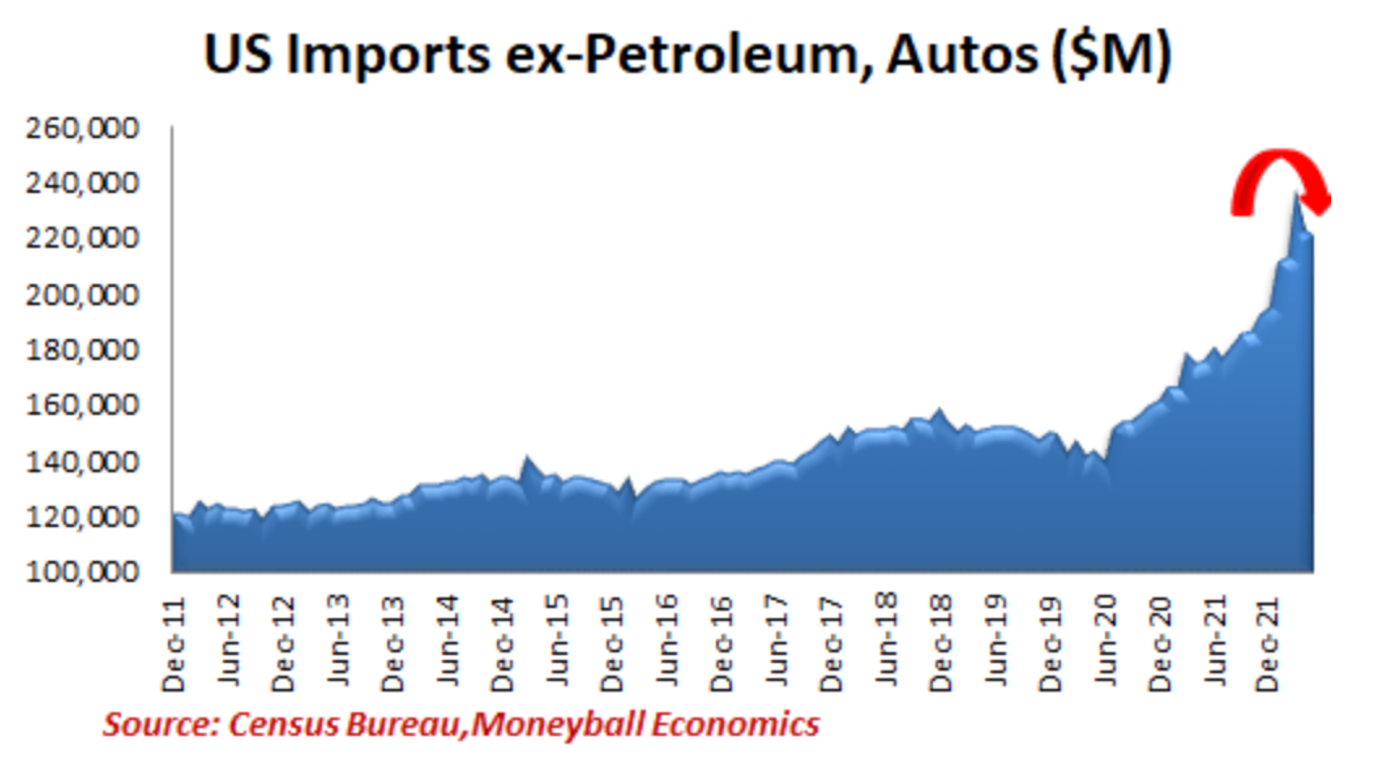 As you can see, import levels soared starting in 2020. But since March 2022, they’ve fallen about ten percent a month. That’s huge. That’s twenty billion dollars gone in a few months.

Why the severe drop-off? Because of belt-tightening by Joe Six-Pack!

And now we’re seeing big declines in categories including Furniture, TVs, Computers, and Jewelry. So generally speaking, you should avoid investing in retailers that sell those items.

Ready for a specific play to take advantage of what’s happening?

I’ve got a great idea for “Pro” subscribers below.

Zatlin out. Talk to you soon.