The Market Doesn’t See This Coming… But I Do

Companies are expecting a recession — but the stock market isn’t!

What’s that mean for us?

A profit opportunity handed up to us on a silver platter.

The Market Doesn’t See This Coming… But I Do

Last week, I explained how a short squeeze was driving up the market.

And sure enough, we’ve seen the S&P 500 continue to climb.

But here’s the thing: technicals may rule the roost right now. But come January, fundamentals will finally come back into play.

That means we only have a few weeks to get positioned before this house of cards comes crashing down.

The Market Just Doesn’t Get It

Q3 GDP… jobs… consumer-spending — a lot of recent economic data has been strong. Furthermore, earnings season was better than expected.

So the technicals and fundamentals are in sync — at least, they’re in sync if we’re looking directly in the mirror (i.e., looking at the current landscape).

But if we look forward, we can see a house of cards that’s about to come crashing down.

Consumers are Spending — Sort Of

And over the last ten months, spending’s up almost ten percent versus last year.

But if you pull back the curtain — if you actually look deeper at this data — the situation gets ugly. Let me show you: 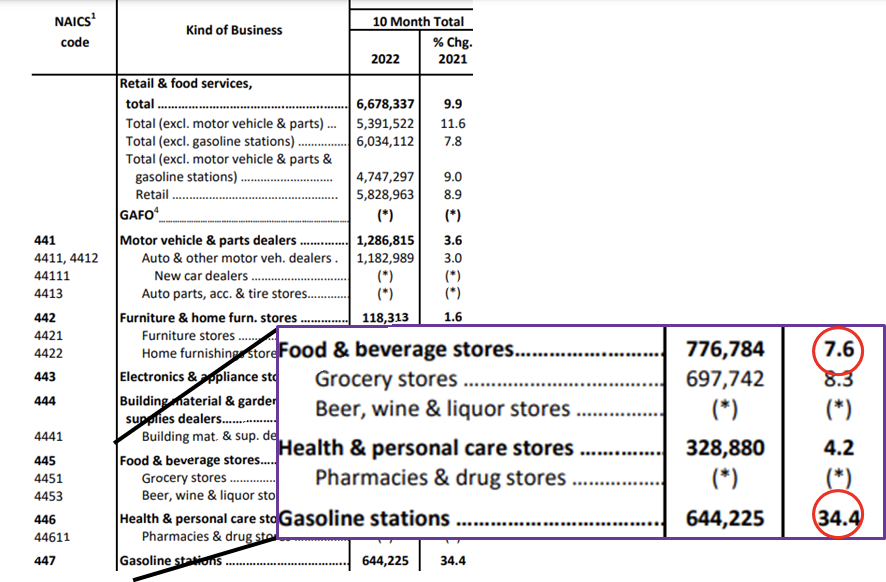 This is a detailed look at recent retail spending. Notice how the strength comes mostly from two categories: Food & Beverage, and Gas.

Over the last ten months, spending on gas is up thirty-four percent. Woah!

People aren’t out there buying couches (furniture spending is up less than two percent), cars (up less than four percent), and electronics (down twelve percent compared to last year).

Instead, they’re buying the things they need — essentials like food and gas.

What does this mean?

Bracing for a Recession

It means some of the country’s biggest retailers need to brace for a recession.

As Target’s CEO said, “Sales… softened meaningfully.” He also noted this is “an environment where consumers have been stressed.” He also said, “We expect the challenging environment to linger on beyond the holiday.”

TJ Maxx saw sales drop two percent, due to modest sales for clothes (after all, winter’s coming and people are still returning to offices), but weaker sales on home goods.

Then there’s Walmart, which is an interesting case.

You see, half of Walmart’s sales come from groceries. Additionally, three-quarters of its growth comes from people with incomes higher than $100,000. Even America’s wealthier consumers are seeking ways to save money. Noted Walmart’s CEO, “Regardless of income levels, families are more price-conscious now.”

So, how bad will things get?

Micron Technologies (Nasdaq: MU) is one of the world’s largest manufacturers of memory chips. Everything electronic has a memory chip.

Micron just announced it’s slashing production by twenty percent. That means it expects durable goods to drop at least twenty percent, if not more, starting early next year. (Remember, what it makes now takes a while to end up in a finished product.)

So we’ve got retailers struggling, and they’re forecasting belt-tightening. (No layoffs, though, at least not until after the holidays.)

This is exactly how recessions start: with something that looks small.

But then the dam bursts — and the flood happens.

Essentially, companies are planning for a recession. But the market isn’t.

So for now, avoid durable goods companies and retailers. Maybe sell what you own now and plan to come back in a few months and buy when prices are lower.

Furthermore, be sure to check out my “Moneyball Pro” pick below. It explains how to play this pullback in consumer spending for potential profits of more than 200%.