The Travel Sector’s Booming, So Let’s Invest in… Steak?!

The glory days of this economic cycle are behind us.

Face it: the post-Covid sales boom has peaked, and left us almost no growth… almost.

You see, one sector still has plenty of room to grow…

So if we know where to invest, we still have plenty of opportunities to profit.

The Travel Sector’s Booming, So Let’s Invest in… Steak?!

Last year, you could swing a dead cat and hit a stock that was heading up.

This year? Not so much. And 2023 isn’t looking too promising, either.

But what if I told you that the travel industry has plenty of room to grow?

In fact, this is the sector I believe could usher in the next wave of economic promise.

According to the Transportation Security Administration, this past Thanksgiving saw the third-highest level of travelers since 2000. We’re talking around two-and-a-half million people.

And this growth will undoubtedly result in winners and losers.

Let’s start with the losers…

The Losers from the Travel Boom

For one, people traveling for vacation or visiting family means less time sitting at home watching Netflix (Nasdaq: NFLX). (This company also happens to find itself in a tug of war for streaming market share with Disney and Hulu.)

For another, the gaming industry is in a major slump. And video-game retailer GameStop (NYSE: GME) recently missed its earnings projections by $200 million. Sales were down year-over-year.

As for the winners…

You might think I’m focused on companies that help people book trips or review accommodations. But surprisingly, when I look at my hiring data, I don’t see growth in these sectors.

For example, if people are traveling more, you’d expect them to be using booking platform TripAdvisor (Nasdaq: TRIP). But look at its hiring: 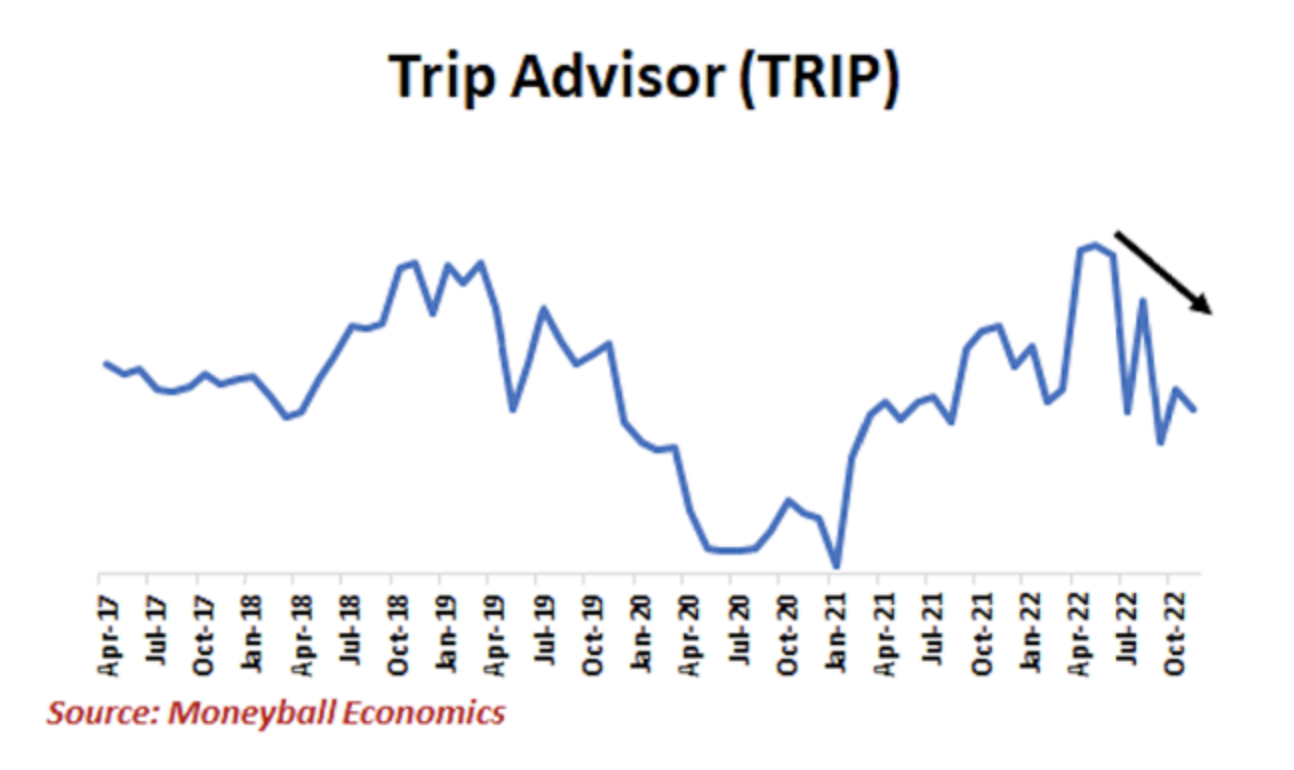 This company seems to have peaked over the summer, and been wilting ever since. 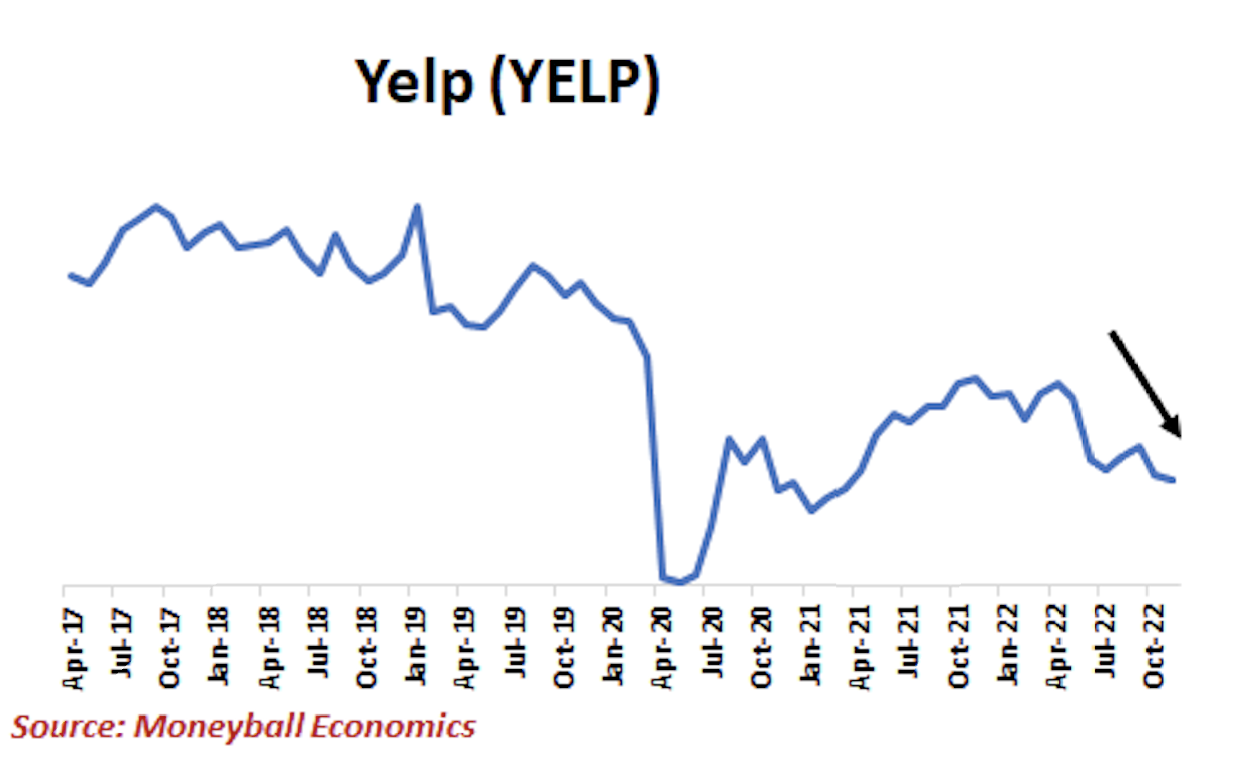 And hiring for Delta Air Lines (NYSE: DAL) surged as we came out of Covid, but now it’s drooping: 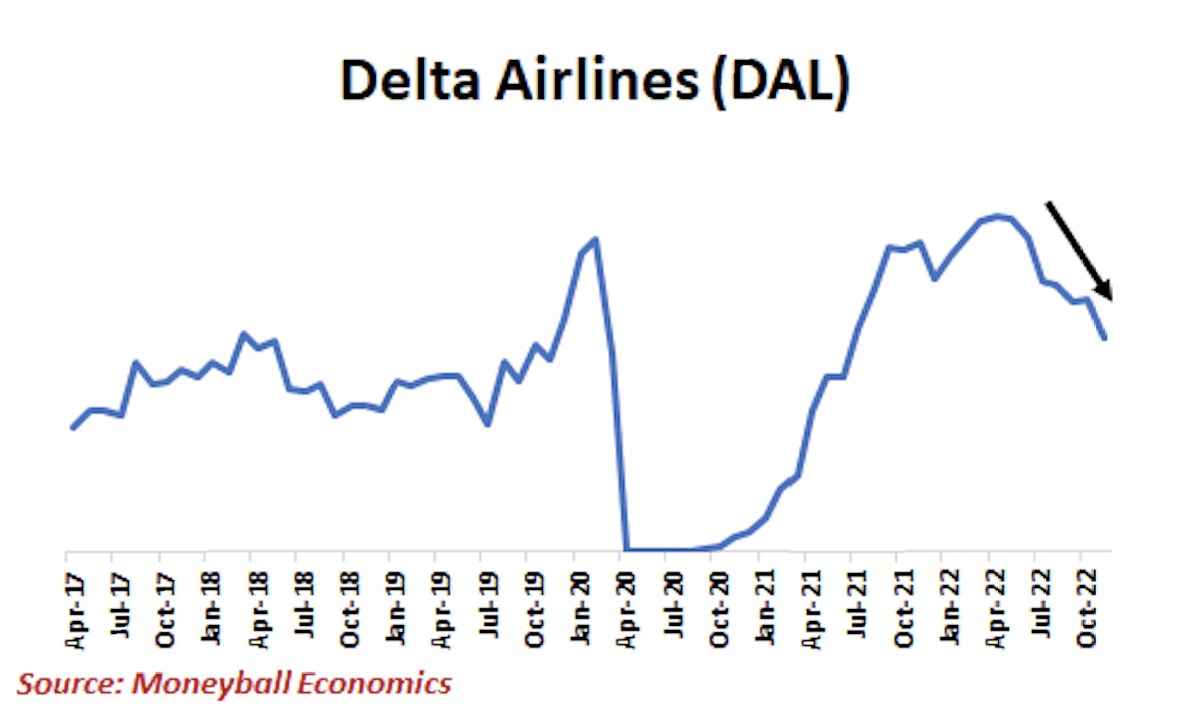 All three companies are slowing their hiring. And various 2023 sales forecasts line up with this slowdown. For example:

Here’s the key takeaway: we can’t just jump into the travel industry willy-nilly.

While there’s still room to grow — remember, we still haven’t returned to 2019 travel levels — the gap is getting smaller and smaller. That means hiring is slowing, and so is expected growth…

At least for most areas in this industry…

The business travel sector, meanwhile, has plenty of room for growth.

We’re just starting to get back into the office. And we’re seeing more on-site travel, more conferences, and more business meetings.

In short, this is a big opportunity. Let me show you just how big…

To start, look at these stats:

Clearly, there’s a big gap here that’s going to be closing as companies ramp up their travel.

Las Vegas, Nevada is considered the U.S. center for conferences.

This year? 4.6 million people attended conferences. Obviously, that’s much higher than last year, but there’s still growth potential of as much as twenty-five percent.

So, where exactly should we be investing? Companies heavy into the Vegas scene?

Sure, you could invest there. But here’s a thought: invest in steak dinners, instead!

Fifty percent of business for Ruth’s Chris Steak House (Nasdaq: RUTH) comes from corporate spending. And right now, this stock is trading at a deep discount — about twenty percent below where it was pre-Covid — and offering a tasty three-and-a-half percent dividend.

Additionally, take a look at Uber (NYSE: UBER). When business travelers come into town, some rent a car. But a lot take Ubers.

By the way, if you’re a “Pro” subscriber, I’ll reveal a company that’s in a particularly sweet spot heading into 2023 and offers even more upside.