Wall Street's Dead Wrong about Cars — Here’s How to Profit

Let me tell you — when it comes to the future of the car industry, Wall Street’s got it all wrong.

In my latest video, I’ll explain why…

Then I’ll share my strategy for profiting from this industry’s future!

Or as some people this week have been calling me, [Zatlin rubs beard] “Scruffy McGee.”

Because, you know what? I'm on vacation, and I'm not shaving.

I want to start by wishing you a wonderful new year. I hope you and your loved ones are set for a fantastic end of 2021 and a fantastic start to 2022.

And frankly, that's what's on my mind right now:

How to set 2022 in motion for financial success — including a big bet on the auto industry.

I've been talking a lot recently about how I’m planning to position my portfolio going forward.

And one of the themes is electric vehicles. That's a long-term play for me.

In the short-term, though, the main theme is all about “normalization post-COVID.”

And we’ll look at some sectors where there are opportunities.

In fact, I believe that very soon, sales in the auto industry are going to be rising. And I want to be positioned correctly.

You see, I think we're going to start off with a bang, and end with a fizzle.

To start, we've got an opportunity to ride the auto industry hard…

I think stock prices in the industry are fully “baked in.” In other words, there’s a lot of upside here — but it's already priced for perfection.

Let's start with the basics: 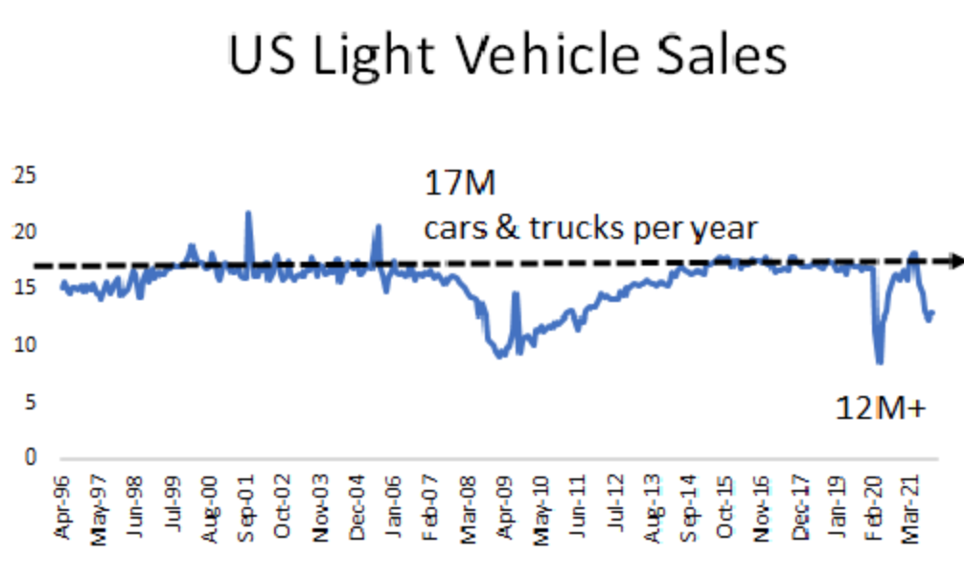 This chart shows how many cars and trucks get sold in America.

And as you can see by the black line going across the top, Americans typically buy 17 million cars a year.

When they don't, however — well, you can see that big recession. That represents a slowdown in demand.

But do you see more recently where there's a dip closer to 12 million?

Well, that's not a demand problem. That's a supply problem.

The auto industry can’t get semiconductors and other core components, so they can't make cars.

A Good Time to Make Cars

In brief, prices are getting bid up — in fact, if you haven't recently bought a car, you’d be shocked. 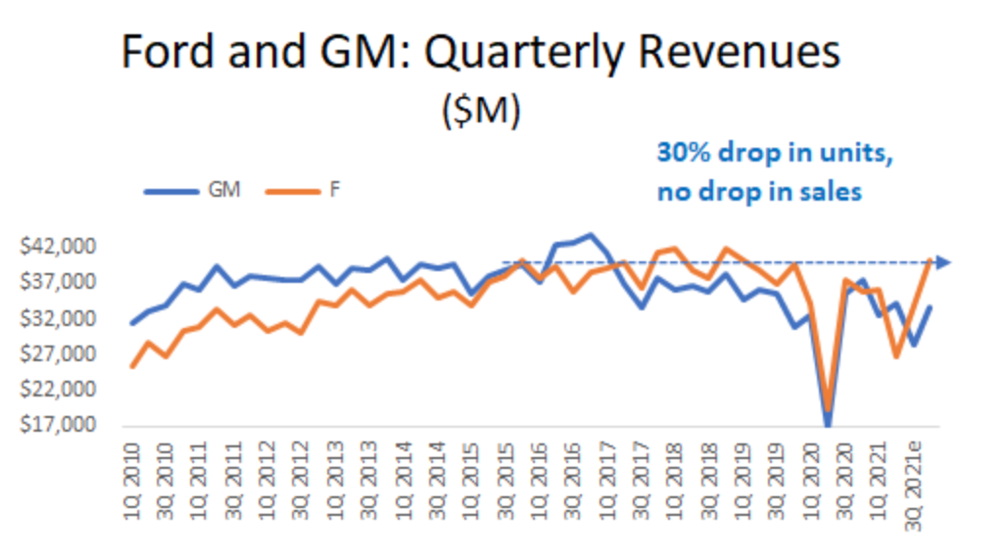 Look at what's going on with Ford and GM:

30% fewer cars are being sold today versus what’s normal.

But look at the revenues for Ford and GM…

It's as if nothing has happened!

And the reason is, there’s a supply shortage. So consumers are bidding up prices.

But there's an equal and offsetting 28% jump in prices!

So prices are up, year-over-year, almost $11,000. To put that into perspective, in the five years before COVID, prices went up a total of 12%.

Meanwhile, in one year during COVID, they've gone up almost 30%. It's crazy!

And remember, this is pure profit. It's not just that revenues are staying steady.

They're more profitable at Ford and GM because it's all upside. This is just extra money that consumers are willing to throw at them — until competition sets in, that is.

When is competition going to set in?

According to the markets, it’s not going to happen in 2022.

There will continue to be parts shortages…

Which means consumers are going to continue to have to bid up prices.

That’s what Wall Street is saying. But I'm telling you right now:

So let’s talk about what the expectation is.

You see this? That's Ford stock price. As you can see, it’s up massively. It’s never been this high.

And keep in mind, it's not as if Ford is going above its normal production. It’s just getting back to normal.

But its stock price is acting like it’s double or triple what it would be doing.

And it’s the same thing at GM.

This is GM's stock price compared to the U.S. auto sales.

When auto sales are down, that jams prices up. And remember, that's pure profit for GM and Ford.

And guess what? Usually there's a substitute “good thing” going on…

For example, what's good for new cars is bad for used cars, and vice versa.

Well guess what? In a shortage situation, everybody wins.

So again, you saw Ford’s and GM’s stock prices.

Now look at the madness with CarMax, a used car seller.

And look at the madness with AutoZone, an auto parts retailer.

If you can't buy a new car, you’d better spend money taking care of the car you have.

In other words, the auto industry is enjoying the “boom” part of a boom-bust cycle.

So when does it cycle back down?

GM’s stock price is already up 70%. Ford’s price has doubled.

These companies are already priced for what's coming down the pipeline and “normalization.”

And again, under “normal” production circumstances, they wouldn't be seeing these stock prices.

So I'm raising my hand right now and warning you:

There's a lot of upside already baked in here.

Right now, people will buy anything because they need a car.

Five million units this year alone are in shortfall.

Typically, used cars compete with new ones. So as new cars come online, you’d imagine that the price of used cars would be under threat.

Because remember, there's also another element here to consider:

And we've got a lot of cars coming off leases that weren't driven that much. [Zatlin chuckling] Because, let's face it: very few people drove in 2020 and a lot of 2021.

So you've got some really “un-used” cars coming available soon.

Here’s what that means…

I believe we're going to have a lot of problems in the second half of 2022 as supply continues to come down the pipeline.

In the first half though, we're not going to get there quite yet.

We’re barely going to be pushing up to 14 million, maybe 15 million cars in the first half.

Again, there’s a shortfall. There will be pricing pressure. That's just money going right into the pockets of GM. That's going to support the stock price.

But when things normalize in the second half of the year — and if the economy does start to slow down a little bit — it's trouble ahead.

So we've got the three-year leases I mentioned, and we've also got these barely-used cars in great shape…

And as the year progresses, more and more cars are going to come up.

Quite frankly, this is not a demand problem. Demand is there.

Do you honestly think GM and Ford will maintain their stellar stock prices purely on the strength of today's supply shortage?

Do you really think people will sit around and continue to pay this massive amount of auto inflation?

Or is it likely that we're going have some car companies start to bolt, and maybe drop their prices a little bit (or at least not raise them) or offer some screaming hot deals in terms of giveaways?

My Advice to You

And I'm saying they won't keep paying it.

So that expectation of 5 million cars staying at this rich price point — that's what Wall Street expects.

But I'm going contrary on this one:

I think the auto industry is strong in the first half…

But I think the second half is very much up in the air.

For my readers, I advise you to go strong now…

But maybe don't go as strong in the second half of the year.

And in the meantime, I’ll be sharing some specific ideas with you.

Happy new year, and I’ll speak to you soon.