When the market’s in trouble, small-cap stocks typically perform the worst.

So why am I recommending that you add them to your portfolio today?

Let me tell you exactly why…

As their name suggests, small-cap stocks are companies with relatively low market capitalizations — typically between $300 million and two billion dollars.

They’re certainly not the biggest companies…

But historically, they’ve outperformed large caps by a wide margin.

And as you’ll learn today, I believe they’re set to surge…

Small caps tend to struggle in bear markets, but shine in bull markets.

Their struggles during bear markets are linked to three factors:

But during bull markets, they can shine. Here’s what I mean…

Small-Caps Run with the Bulls

During boom times, the value of many companies grows. But the value of a small cap often grows faster. Makes sense — it’s easier to go from a billion-dollar market cap to two billion dollars, than from $100 billion to $200 billion.

As you can see below, over the past forty years (mostly boom times), the Russell 2000 (heavily weighted with small caps) has outperformed the S&P 500 (heavy with large caps):

Bottom line: small caps can be dicey in bear markets, but perform well in bullish ones.

But given that the market’s been bearish for most of 2022, why scoop up small caps now?

There are two key reasons…

First, an inflection point may be on the horizon. Sure, we’re currently facing some sort of recessionary period, but it’s likely that a bullish period is right behind it — and that’s great news for small-cap investors.

This is a two-decade snapshot of large-cap stocks’ Price-to-Earnings ratio. This is a useful metric for determining whether, historically speaking, you’re paying too much or too little for a certain level of earnings.

See the orange arrow running left to right? Any time the P/E ratio is over that line, historically speaking, stocks are overvalued. And as you can see, currently, large caps are way above that line.

The P/E ratio is currently below the line, meaning we’re in oversold territory.

This is where you can make some money!

Look at the Hiring Data

Small caps are ripe with potential. But which ones should we target?

Simple: Look at my hiring data!

Helmerich & Payne (NYSE: HP), a small cap focused on drilling, is hiring, too: 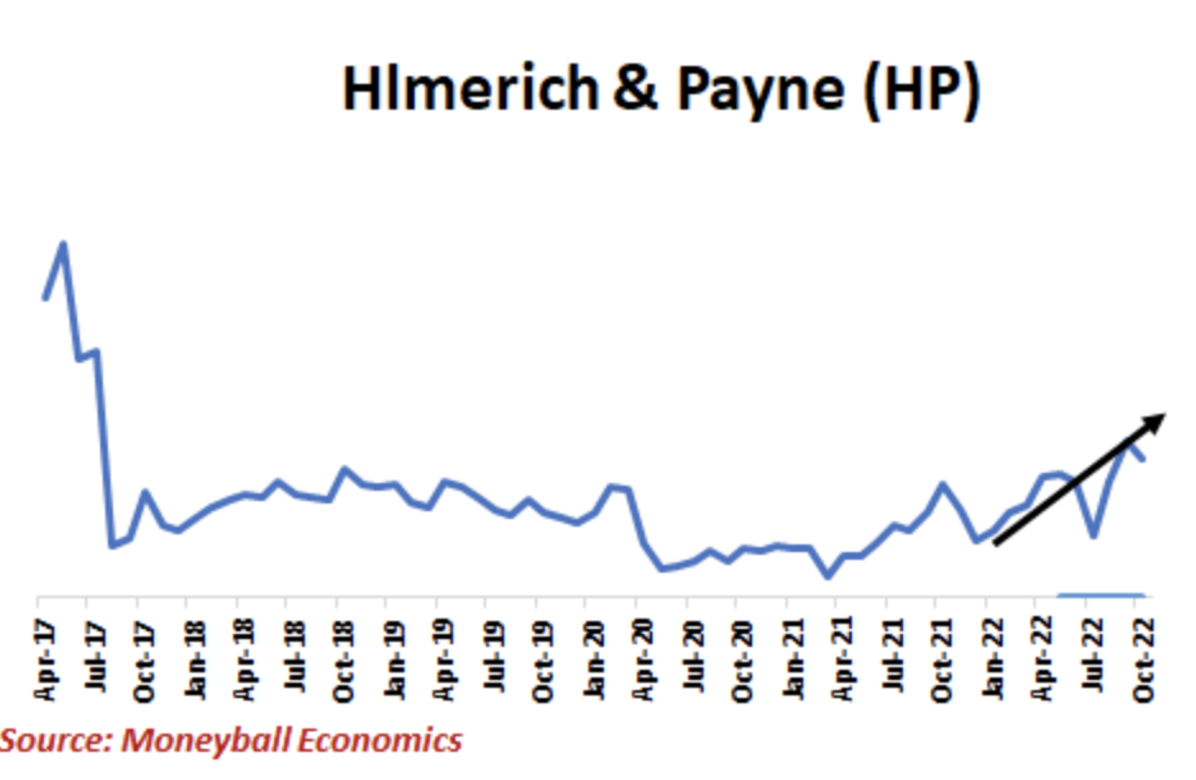 When I’m looking for the “right” small caps to invest in, I look for accelerated hiring and dividends…

Small Caps are Poised for Growth

So now you know: small caps are poised for growth.

And certain small caps are poised for the most growth.

I showed you two examples of such small caps today.

And if you’re a “Pro” subscriber, check out one of my favorites below!

Either way, consider adding small caps to your portfolio today.

We’re in it to win it. Zatlin out.